Merry Xmas (War is Over) - John and Yoko's political message

Along with festive classics by Slade and The Pogues, John Lennon and Yoko Ono's 'Merry Xmas (War is Over)' is one of the most familiar of all Christmas pop songs.

As a politics lecturer here at Liverpool, I'm interested in the song as a form of political protest, which emerged from an era of activism and opposition to the Vietnam War. During this era of huge cultural changes, youth culture and political radicalism went hand-in-hand. For a number of years, Lennon and Ono had used their stardom to call on the world to 'Give peace a change'. In 1969 they proclaimed 'War is Over - If You Want It - Happy Christmas from John & Yoko' from a series of billboards in major world cities.

But with the release of 'Imagine', Lennon realised that pop music could be an effective means to spread a message: the political pill could be sugared with a sweet melody. On 'Merry Xmas (War is Over)', released 1971, Lennon and Ono blend Christmas well-wishes with the message that peace is within the world's grasp, if we choose. 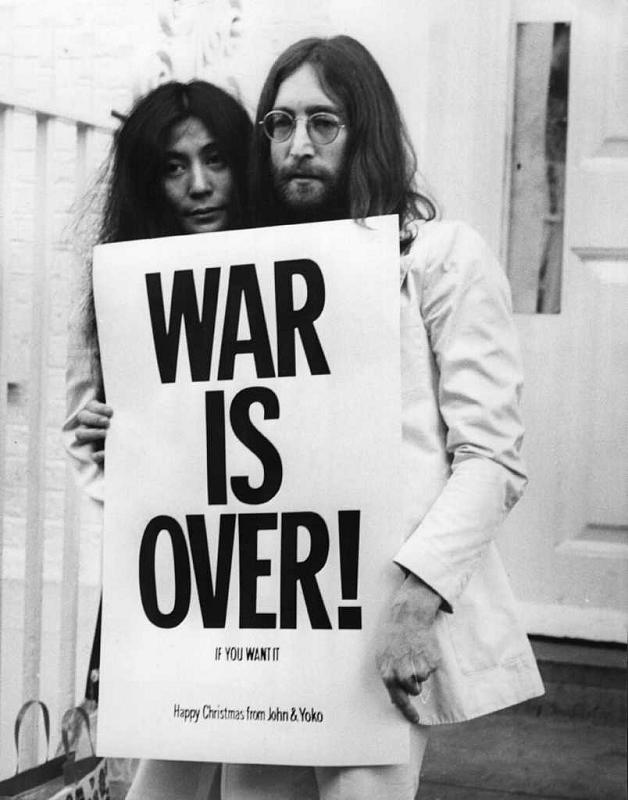 Unfortunately, the 1970s saw many further conflicts. The Vietnam War lasted a further two years. North Vietnam later invaded the South and then, later, neighbouring Cambodia when the genocidal Khmer Rouge came to power. By the end of the decade, the 'Second Cold War' had begun, leading to the intensification of many more conflicts around the world.

Although the end of the Cold War reduced tensions between the superpowers, the collapse of some communist and pro-Soviet regimes led to civil war and bloodshed - as in the former Yugoslavia. The War on Terror led to further interventionism by the United States and the occupation of Afghanistan and Iraq. This Christmas, we witness scenes of appalling suffering from the besieged city of Aleppo, Syria. War is certainly not yet over, 45 years after Lennon and Ono's plea.

Give peace a chance?

Nonetheless, research on international conflict indicates that the overall global trend is towards fewer deaths as a result of war. Regions that witnessed incredible violence in the Twentieth Century, such as Europe and Southeast Asia, have become dramatically more peaceful - although some conflicts still smoulder. Notably, large-scale inter-state conflict seems to be becoming rarer; civil wars are now the most significant form of large-scale conflict.

Although the potential for war exists in a number of places around the world, active violent conflicts are now largely concentrated in a few regions: the Middle East, North Africa and Sub-Saharan Africa. As terrible as recent civil wars in Syria and Iraq have been, on most accounts the years between 2007 and 2011 were some of the most peaceful that the world has ever seen. After a year of political turmoil, it's worth remembering that over the past few decades, more and more people around the world seem to have been willing to give peace a chance.