Executive Pro-Vice-Chancellor for the Faculty of Science & Engineering 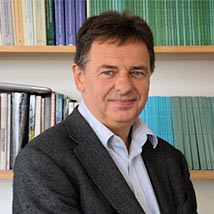 Wiebe van der Hoek is Professor in the area of Knowledge Representation and Reasoning. He came to take up a Chair at the Department of Computer Science of Liverpool in 2002, and was Head of Department 2008 - 2012. In 2014 he became Head of the School of Electrical Engineering, Electronics, and Computer Science. His research interest is in Dynamic Epistemic Logic, that is, logics to reason about information change. He also studied those logics in Game Theoretic settings. Since 2012 he is (co-) Editor-in-Chief of Springer-Nature flagship journal in the Philosophy of Science, and since 2002 he co-chairs LOFT, a biannual conference on Logic and the Foundations of Game and Decision Theory.

He sits on the Digital Steering Group at UoL, and chairs the Digital Alder Hey / University of Liverpool Steering group. He sits on the Boards of Sensor City, the Cockcroft Institute, the MIF, the Daresbury Labs Strategy Group, and the IBM/UoL partnership group.