Jacinta graduated with a Bachelor of Science majoring in Mechanical Engineering from the University of Western Australia in 2014. Thereafter, she pursued a Masters in Medical Radiation Physics with the Centre for Medical Radiation Physics (CMRP) at the University of Wollongong. Her thesis was a study of the Relative Biological Effectiveness (RBE) in proton beam therapy by application of a novel silicon microdosimeter. RBE was derived given a microdosimetric approach where experimental data was evaluated alongside Monte Carlo simulations generated using Geant4. Throughout her study she engaged in short summer internships in the Medical Physics Research Department, Sir Charles Gairdner Hospital in Perth, Australia and at the National Cancer Centre, Singapore General Hospital in Singapore.

Jacinta was awarded her MSc with Distinction in July 2016 and following this, joined the OMA project in October 2016 where she is working in parallel towards a PhD with the University of Liverpool.

Halo-Dose correlation in a medical accelerator

Online Beam Monitor Based on the LHCb VELO Detector

Making a difference with physics and cancer treatment 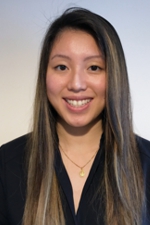