The LHC has demonstrated an unprecedented optics control for high energy colliders, down to the 1% level in β-beating and |C−| = 2×10−4 in coupling. The high luminosity upgrade of the LHC (HL-LHC) will challenge the efficiency and accuracy of optics measurement and correction algorithms in many ways. As a consequence:

The HL-LHC aims to push β* down to 15 cm in IP1 and IP5. This will increase the β-function in the triplet quadrupoles above 20 km, enhancing the impact of the triplet alignment errors and field quality in the machine optics. Additionally, the Q1 and Q3 quadrupoles of the HL-LHC are split into two magnets, which introduces two new sources of optics errors that have to be corrected using the same number of circuits as in the current LHC triplet, thus making the IR corrections more challenging than in the current LHC.

The maximum β-beating is generally located at the IPs along with waist shifts. The resulting rms β-beating of 8.6% is a factor 2 above the expected accuracy in the β∗ measurement from K-modulation of 4%, but it is dominated by few seeds in the tail of the distribution. These seeds should be analysed to improve the correction algorithms. Concerning the β functions at the crab cavities the performance of corrections is considerably better than at the IP. A maximum β-beating of 3.1% is expected at the crab cavities after correction. Also, global corrections seem to have little effect in the final maximum β-beating.

Due to the very large β-function in the triplet, small tilts of the quadrupoles become very strong sources of linear coupling, while the tolerance for HL-LHC operation is set to |C−| = 0.001. The segment-by segment technique has been successfully used to correct such localised sources of coupling in the LHC. In the HL-LHC triplets we have 12 independent coupling sources per IR but only two local correctors, making local spikes of coupling unavoidable. As the |C−| depends on the global average of the f1001 driving term these spikes have little impact on the closest tune approach. Expected |C−| is well suppressed below the tolerance of 10−3. The MAD-X improvement in version 5.02.12 concerning the treatment of coupling made these results considerably better than previous simulations with older versions of MAD-X.

Accurate modelling of a particle accelerator is crucial for its efficient and safe exploitation. It allows for rapid setup, performance optimisation and predictions upon parameter changes. A beam-based or online model should be built to reproduce all available measurements, including misalignments, magnetic field errors, orbit and β-beating. A large part of the tools required to automatically build MAD-X models using magnetic measurements, LSA settings and measurements is already available. The constructed beam-based models and their predictive power need to be verified in the LHC.

Feed-down to coupling also represents a significant challenge as feed-down from the nonlinear errors in the experimental IRs has the potential to generate very large shifts to the linear coupling during the squeeze, up to |C−| = 0.025 when a tolerance of |C−| ≤ 0.001 is estimated for the HL-LHC. Therefore, correction of the IR coupling from feed-down during the squeeze will be essential.

Perturbations to linear optics are not the only operational challenges which may arise from uncompensated nonlinear errors in experimental insertions. Distortion of tune footprint is also a significant issue due to the impact it may have on the Landau damping of instabilities. The impact in the HL-LHC is potentially far greater, for Landau octupole tune spread can be enhanced by the ATS telescopic squeeze: by end-of-squeeze, a significant proportion of the target error table seeds show octupole errors in the experimental insertions generating a tune spread larger than that created by the Landau octupoles during LHC operation. There is a serious risk that uncompensated octupole errors in the HL-LHC experimental insertions will cancel or distort the tune footprint to the extent that Landau damping will be lost during the β∗ squeeze. Furthermore, normal octupole errors are not the only source of footprint distortion arising from the low-β IRs: the orbit offset in the triplets and separation dipoles when the crossing scheme is applied will cause high-order errors, and in particular normal and skew decapole and normal dodecapole errors, to feed-down to normal octupole fields. 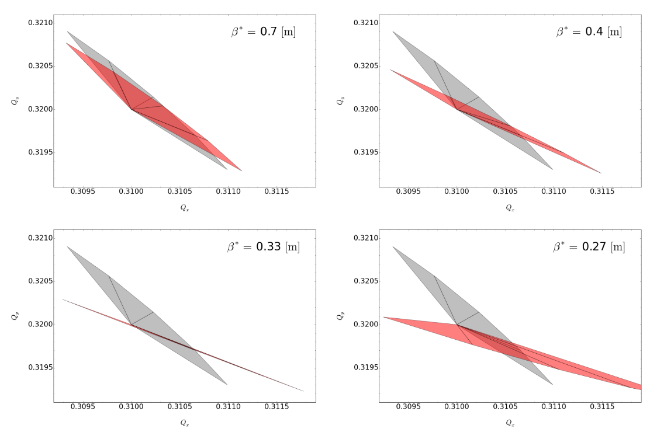 Distortion of tune footprint during a nominal LHC squeeze. The model used consists of an effect model of the normal octupole errors in IR1 and IR5, which reproduces the observed detuning at β* = 40 cm and 60 cm, together with Landau octupoles powered as per operation for Luminosity production in late 2016. Grey regions show the footprint expected in the absence of the IR contribution, red regions show the expected footprint in the real LHC if IR octupole errors are left uncompensated.

The potential for significant distortion of tune footprints and Landau damping as a function of the squeeze or the crossing scheme makes local compensation of high-order IR errors an operational concern for the HL-LHC. It will be very important to establish procedures for the linear and non-linear optics commissioning in the HL-LHC and identify possible limitations coming from increased non-linearity. Having the facility to compensate such errors will be essential but may require a serious revision to the linear optics correction strategy.

The HL-LHC will require robust methods for beam-based correction of the non-linear errors in its experimental insertions. Two methods exist which may apply generally to a wide range of multipole errors. The measurement of resonance driving terms has the potential to allow for direct compensation of nonlinear sources in the IRs. So far only octupolar resonance driving terms have been used to validate corrections in the LHC.

Direct measurement of dynamic aperture (DA) may also be a viable option. Conventional measurements based on single kicks are not possible at top energy due to the high rigidity of the beams and destructive nature of the measurement. The study of short-term and long-term DA as observables has been validated at injection in the LHC, where a clear impact on beam lifetime was observed, indicating direct DA measurement should be viable in the HL-LHC. DA and lifetime are significant figures of merit for the IR correction quality which makes direct optimisation of DA an appealing option for compensation of the IR errors, but given the global nature of such a measurement the challenge in its application will be separating contributions from different IRs and multipole orders. To this end DA must be complemented by methods based on study of the optics.

Regarding the sextupole-order errors, direct beam-based minimisation of observed feed-down is a viable option, which should in principle compensate the operational impact arising from linear optics and coupling perturbations. On the downside, minimising feed-down is unlikely to provide an optimal compensation of sextupole resonances, and may give less gains in dynamic aperture. It will be necessary to study this option further in simulation to help define correction priorities in the HL-LHC: it may be that the operational impact of β∗ imbalance and coupling induced instabilities outweighs the need for an optimal resonance driving term correction. In particular, it may be possible to adapt the segment-by-segment technique normally used for commissioning of local quadrupole corrections in LHC insertions, to the study of sextupole feed-down. 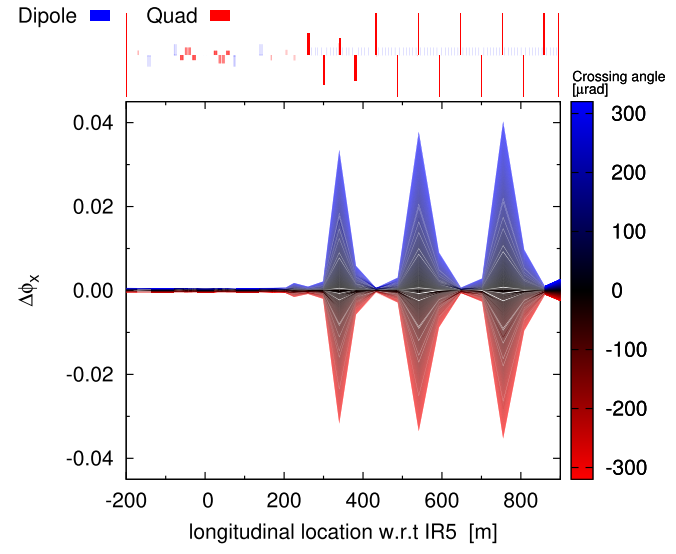 Segment-by-segment phase advance discrepancy due to sextupole feed-down in the HL-LHC. Crossing angle is indicated in colour.

The measurement of Resonance driving terms (RDTs) is another effective method to probe machine nonlinearities and can thus be used to confirm the effectiveness of specific corrections and will be important to validate nonlinear correction schemes in the HL-LHC.

HL-LHC represents a challenge for optics measurement and correction in both the linear and non-linear regimes. Fast and flexible tools will be required to efficiently commission the large amount of optics foreseen for the β∗ levelling process. Algorithms are being developed and tested in the LHC to address these challenges. Further developments are still required to guarantee a 2% accuracy in β∗.

The non-linear errors will pose severe challenges even for the linear optics commissioning via their feed down to β-beating and coupling, and by reducing the available DA for optics measurements with the AC dipole. Iterative corrections alternating the target between linear and non-linear orders will be required. A broad spectrum of techniques to measure and correct IR non-linear errors are emerging but a substantial effort is required to demonstrate their feasibility. A strategy based on these techniques should be defined and verified with simulations of realistic scenarios for optics commissioning in HL-LHC.

The PhD project’s work will be focused on the computation of optics for High Luminosity LHC, and the demonstration of measurement and correction techniques’ feasibility. The project will cover exploration of new parameter space, optimization of nominal running scenarios, reduction of optics transition time, and improvement of simulation software as well as beam-based tools for automatic optics generation.