Stephanie Petrie is Honorary Senior Research Fellow at Liverpool University, UK. She became an academic in 1995 after a career in social work that began in 1970. She has worked at the Universities of Bradford, Lincolnshire, and Humberside. Her research and published work includes a wide range of welfare issues affecting children, young people and their families in the UK, USA and international context. She is particularly committed to participatory research methods and collaborative work. 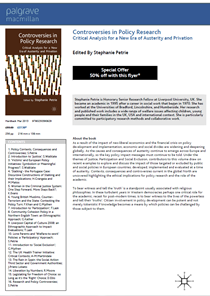 As a result of the impact of neo-liberal economics and the financial crisis on policy development and implementation, economic and social divides are widening and deepening globally. As the causes and consequences of austerity continue to emerge across Europe and internationally, so the key policy impact messages must continue to be told. Under the themes of Justice, Participation and Social Exclusion, contributors to this volume draw on recent examples to explore and discuss the impact of those targeted or excluded by public and social policies in European countries, developed, implemented and evaluated at a time of austerity. Contexts, consequences and controversies current in the global North are uncovered highlighting the ethical implications for policy research and the role of the academic. To bear witness and tell the 'truth' is a standpoint usually associated with religious philosophies. In these turbulent years in Western democracies perhaps one critical role for the academic, recast for post-modern times, is to bear witness to the lives of the powerless and tell their 'truths'. Citizen involvement in policy development can be potent and not merely tokenistic if knowledge becomes a means by which policies can be challenged by those subject to them.