Monika joined Miranda House, Delhi University for her undergraduate studies in 2011. She graduated in 2014 with Physics Hons. Then joined MNIT, Jaipur for her master's studies.

Monika graduated in 2016 with a Master’s degree in Applied Physics. Her master thesis was titled as ‘Laser-Driven Forces and Electron Acceleration in Plasma’. She numerically investigated the capability of plasma medium as a particle accelerator. Monika has done a summer internship at ARIES, Nainital studying different cosmological models and using IRAF software for data analysis. After her Masters, she joined IISER Mohali for one year DST-MPG (Govt. of India and Max Planck Society) funded research project. There she worked on light-matter interaction. 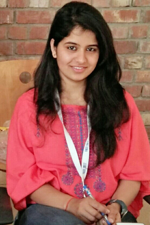