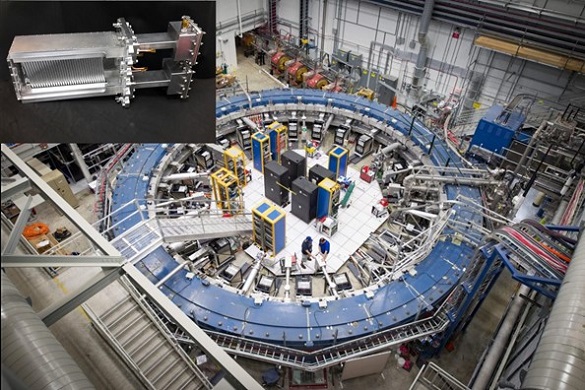 The Fermilab Muon g-2 experiment, which involves University of Liverpool researchers, has reported landmark results that point towards evidence beyond our current understanding of how the Universe works as described by the Standard Model (SM).

Fermilab is America’s premier national laboratory for particle physics research and hosts the international particle physics experiment, Muon g-2, which involves researchers from seven countries. Muon g-2 was designed to probe the magnetic properties of the muon, a heavy sibling of the electron that lives for about 2 microseconds, in great detail.

Today (Wednesday, 7 April) the first results from the Muon g-2 experiment were revealed and show fundamental particles called muons behaving in a way not predicted by the Standard Model of particle physics.

These new results, released in a seminar on 7th April, and published in Physics Review Letters, describe minute, but significant, differences between predictions in the SM and the latest experimental muon data.

Statistically these results have a less than one in 10,000 of being a misleading fluke – approximately the same likelihood as tossing a coin 14 times heads up in a row.

UK scientists contributed heavily to the success of the new experiment. Liverpool’s Particle Physics group was led by Professor Themis Bowcock and, together with Professor Mark Lancaster (Manchester and ex-Spokesperson of the experiment), brought UK detector building and electronics expertise to the experiment. Furthermore, the interpretation of these results relies on seminal work led by Professor Thomas Teubner from the University’s Department of Mathematical Sciences.  His team calculated the SM prediction, to better than 100 parts per billion. This is the equivalent precision to measuring the length of a year to better than 1/100th of a second - a tour de force of theory.

Professor Themis Bowcock said: “This was and remains a very exciting time. Our technical team that had built the LHCb VELO at CERN had developed the technological expertise and recognition to be invited by Lee Roberts to build the tracking detectors. This was complemented by Mark’s team who were electronics experts, and together we have provided an unequivocally important capability to the new experiment. We were lucky enough to have brilliant staff, young post-docs and students working on the detector, data analysis and theory.”

Brendan Casey (FNAL Muon Department Head) said: “The trackers turned out to be absolutely vital to the experiment.  The Liverpool team has been on the front lines of operating and analysing the data from the experiment as we've tackled the challenge of producing the world's best measurement of the magnetic moment of the muon.  This launches a new era of ultra-precision science at FNAL”.

Lee Roberts, Professor at Boston University, and lead on the g-2 experiment for its build and first data takings added: “One of the smartest things that I did when building the collaboration was to recruit UK groups.   The superb build of the tracker hardware, along with significant intellectual contributions, played a major role. Together, we may have opened a long sought for window onto physics beyond the SM.”

So what does all this mean for the Standard Model?

Professor Teubner said: “I started to work on the theory prediction 20 years ago, expecting to eventually find agreement with the experiment. Today the discrepancy is even stronger and the puzzle is more exciting than ever! While we might not yet claim a New Physics discovery,  we are at the threshold  of something really important. I agree (with Lee Roberts) that the tension between theory and experiment has been raised to a tantalizing new level.”

Professor Joost Vossebeld who now heads the Particle Physics Research Cluster and whose own research includes muon physics, said: “These results are certainly striking, especially when considered together with those from LHCb experiment just weeks ago.  Both suggest that unknown physics effects act differently on muons than on electrons; together a discovery may not be too far in the future!”

To find out more about Fermilab landmark announcement, please visit >>>>