LHCb experiment - A flavour of things to come…

The LHCb experiment is one of the four large experiments at the Large Hadron Collider at CERN, situated underground on the Franco-Swiss border near Geneva.

Today the experiment has presented a measurement that may be evidence for a step forwards in the way we think about the Universe.

The universe is made of fundamental particles known as quarks and leptons. Quarks form the protons and neutrons that make nuclei which themselves are orbited by electrons (leptons) to form our constituent atoms.

Electrons are not esoteric particles that only particle physicists worry about,  but central to the operation of every single electronic device around us. After almost a century of study, physicists know both quarks and leptons occur in different types, known as flavours, whose behaviour is predicted by the Standard Model - which is as close to a “Theory of Everything” as we possess to-date.

A cornerstone of the Standard Model is the concept of lepton universality. This tells us the leptons flavours (the familiar electron and its cousins the muon and tau) should behave identically except for their mass. The principal can be tested by studying how often leptons are produced when a short-lived particle, known as a B meson, decays.

The LHCb experiment at CERN’s Large Hadron Collider has been designed to study the different flavours of matter with precision. This mission depends critically on LHCb’s VELO detector which was designed and built at Liverpool by Professor Themis Bowcock and his team.

In 2015 LHCb saw hints that B mesons seemed to decay to electrons more often than muons  which would violate the lepton universality.  LHCb has now unveiled the results of a search based on three times as much data. With this additional statistical precision there is now, unexpectedly, further evidence that something might be amiss with lepton universality.

Dr Stephen Farry, a researcher at Liverpool said: “Does this mean we are witnessing parts of the universe beyond current understanding? The path toward discovery is not yet complete, as to make a discovery in particle physics much stronger evidence is needed. We need the chance of the result being a statistical fluke to be less than 1 in a million – and we’re not there yet.”

With the LHC preparing for an upgrade to significantly increase its capabilities, and more LHCb results on the way, that moment could come soon.

Professor Tara Shears, who leads the LHCb Group at Liverpool, added: “This result is so intriguing. It just might be the first sign of a crack in the Standard Model. Everything points to there being a very exciting journey ahead of us at CERN.”

For further information on these results please visit >>>>> 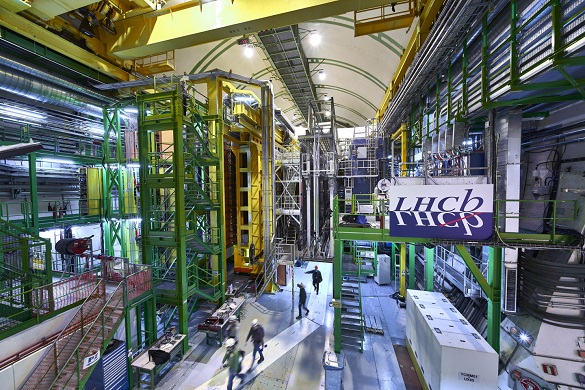