Mattia Fanì joined the AVA project as a PhD student in physics from the University of Genova (Italy) in the discipline of experimental physics in fundamental interactions.

He earned his Master's Degree in physics at the Alma Mater Studiorum - University of Bologna with a specialisation in nuclear and subnuclear physics. During his thesis work he took part in the ALICE Collaboration at CERN. His work showed how the time-of-flight detector could be able to collect all the hits generated by proton-proton collisions at 1 MHz interaction rate foreseen for LHC Runs 3 and 4, starting from 2021. This will allow the time-of-flight detector to register an amount of data four times larger than that initially expected at such frequency without any additional cost and by relying on electronics and triggering system already available at that time.
He also worked at the LNGS in the realization of a high collection efficiency detector for applications in experiments on the direct detection of dark matter.

In April 2017 he was enrolled by CERN as a fellow working towards a measurement of the behaviour of antimatter in a gravitational field in the framework of the AEgIS experiment at the Antiproton Decelerator (AD).

The interaction between antimatter and gravity remains to be studied and the behaviour of antimatter in a gravitational field has never been directly observed to date. Performing such a measurement would allow a meaningful test on Einstein's Equivalence Principle, thus testing a number of theoretical arguments open to the possibility of a difference between matter and antimatter with respect to gravity. More importantly, dealing with low energy beams and pushing the boundary of knowledge up to being able to perform such a measurement will pose new scientific questions and extremely interesting technological challenges to cope with.

In March 2020, Mattia earned his PhD in Physics. His thesis is titled Pulsed antihydrogen production for direct gravitational measurement on antimatter. 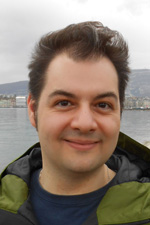