Amit Nanda was conferred with the Masters’ degree in Physics by the School of Physical Sciences, National Institute of Science Education and Research, India. As an undergrad researcher he was also an INSPIRE fellow of the Department of Science and Technology, Government of India.

His masters’ thesis focused on the measurement of ϕmeson production in pp collisions at √s= 13 TeV with the ALICE detector at CERN. Apart from studying the transverse momentum spectra, he also investigated the multiplicity dependence of meson and could observe some similar traits between events due to central pp collisions and peripheral Pb-Pb collisions.

During a summer studentship in CERN, he worked on the quality control and quality assurance of the MICROMEGAS readout boards for the ATLAS New Small Wheel and also gave the design for an automated tool to measure the electrical properties of the readout anode boards. Apart from project work, he also participated in workshops on scintillating fibres, data acquisition and MadGraph.

During the course of his semester project in 2015, Amit published his efforts in optimising the gas flow rate, characterising and performing the long term stability tests of a triple-GEM detector prototype for the ALICE experiment.

As a summer research fellow of the Indian Academy of Sciences, he has worked on the dissipative coefficients of hadronic matter and tried to study the fluid like behaviour of hot pion gas confined in a certain volume.

Amit was recruited as an AVA fellow in August 2017 and his goal is to develop the Ramsey Technique to Measure Ground-state Hyperfine Structure of Antihydrogen. This is where he wishes to integrate his theoretical and experimental skills to understand and design one of the most sensitive tests of CPT invariance ever performed. He aims to build a hyperfine spectrometer line with two cavities, optimize it through simulations and test the setup with a polarized hydrogen source. The precision in the measured hyperfine structure of antihydrogen is expected to improve by a factor of 10. 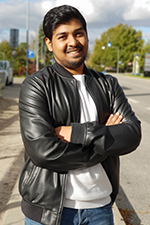