David Haider undertook his Master’s Degree at the Faculty of Physics of the TU Wien, Austria, where he graduated with distinction.

During his studies, his curiosity of the fundamental structure of our universe led him to work at the Institute of High Energy Physics (HEPHY) in Vienna on the analysis of weak particle decays within the data of the BELLE experiment at KEK, Japan. With his acquired theoretical foundation, he spent time working at the Stefan Meyer Institute for Subatomic Physics (SMI) building a cryogen-free, adiabatic de-magnetization refrigerator to serve as a sub-Kelvin platform for a flexible low temperature detector to perform an improved measurement of the kaon mass.

Equipped with the experience to assemble and operate particle detectors in a complex environment, David Haider is based at the Beam Instrumentation group at GSI, Darmstadt, carrying out Ultra-sensitive Beam Intensity Measurements. Within this project a Cryogenic Current Monitor is being developed to allow versatile non-destructive intensity monitoring in storage rings and transfer lines with great precision, which benefits a wide range of areas from an improved control during antimatter production to a new level of online dose monitoring in radiation therapy. 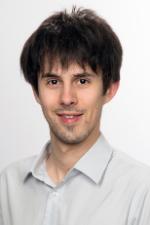