Vassilis Vrettakos studied applied Mathematics at the National Technical University of Athens (Greece). He followed the orientation of mathematical modeling and he obtained his bachelor degree in 2014. During his diploma thesis he developed a model based at the logistic equation for the system renewable resource - population. He followed the master courses "Analysis-Modeling-Simulation" of the University Paris - Saclay in Paris (France). He finished his master degree in 2016 and he did an internship at ENSTA ParisTech where he studied the use of the finite elements method at Maxwell's equations.

He joined the AVA project in 2020, as CIVIDEC fellow, and he works on the analysis of experimental data taken at the AEGIS experiment in 2017-18 at CERN. 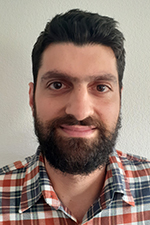