Dominika Alfs graduated from the Faculty of Physics, Astronomy and Applied Computer Science of the Jagiellonian University in Kraków.

During her first-cycle studies she worked in the Jagiellonian PET group taking part in the development the time-of-flight PET scanner prototype based on organic scintillators. For her Bachelor's thesis she experimentally determined the impact of introducing small light guides into a single detector module on the time resolution.

In June 2015 Dominika joined the P349 antiproton polarization experiment whos goal is to determine the polarization of antiprotons in the production process and took part in the measurements in CERN. Since then she has been working on the data analysis focusing on the software development and detectors calibration. For her Master's thesis she performed the drift chamber calibration and prepared methods for the 3d track reconstruction.

Within the AVA project Dominika will work in Forschungszentrum Jülich on the development of  liquid target - based detectors in view of design studies of a detector system for hadron physics experiments induced by the annihilation of stopped antiprotons which includes also the investigation of beam monitoring systems. 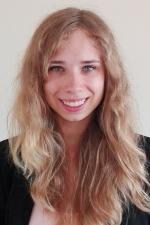