Siara Fabbri graduated from the Department of Physics and Astronomy at the University of California Los Angeles (UCLA) in spring of 2017.

During Siara’s bachelors she conducted research in the Particle Beam Physics Laboratory (PBPL) at UCLA. In her first project at PBPL, she designed and constructed an RF deflecting cavity to streak ultrafast diffracted electron beams as well as perform beam diagnostics. During this time she simultaneously worked closely with graduate student Emma Curry to demonstrate a guided-THz inverse free-electron-laser technique to compress a 6 MeV 100 fs electron beam by nearly an order of magnitude and develop a longitudinal profile diagnostic.  The final project she took part in involved efficient energy extraction from a relativistic electron beam in a strongly tapered undulator.

Siara joined the AVA project in 2017 and will be based at the University of Manchester / CERN, where she will develop a project on the “Optimization of Degrader Integration, Beam Injection and B-field Measurements”. 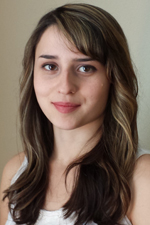