Markus studied physics at the Vienna University of Technology (TU Wien), where he received a bachelor’s and a master’s degree in physics, both with distinction. During his studies he spent time at the Max Planck Institute for Plasma Physics in Munich, working on his bachelor’s thesis, and at the ETH in Zurich, attending lectures and working on a scintillating fibre detector for the Mu3e experiment.

Markus was recruited as AVA Fellow in February 2017 by the Max Planck Institute for Nuclear Physics in Heidelberg. From May 2017 on he will be based at the proton g-factor experiment in Mainz and will be a member of the BASE collaboration.

As an AVA Fellow his work will focus on advanced cooling techniques for protons and antiprotons in penning traps. As protons or antiprotons do not have transitions suitable for laser cooling, sympathetic cooling by coupling to laser-cooled beryllium ions will be attempted. A successful application of this technique promise improved measurements of the proton and antiproton magnetic moment. 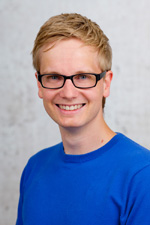