Jeffrey earned his Bachelor of Science degrees from Purdue University in Physics and Nuclear Engineering in 2014. He then went to the University of Chicago where he earned his Master of Science degree from the Physical Sciences Division in 2016. His thesis project on the 'Implementation of Notch Filters for Decreasing Systematic Error on the Experimental Limits on Tensor Currents in Li-8 Beta Decay' was performed at the Beta Paul Trap experiment at Argonne National Laboratory. Afterward, Jeffrey continued to work at Argonne as a Research Associate for the University of Notre Dame. He built a beam line source that is used for precision mass measurements at the Canadian Penning Trap.

Jeffrey joined AVA in May 2018. He is stationed at GSI/University of Heidelberg and is working on the ARTEMIS experiment, which focuses on the measurement of nuclear magnetic moments in highly charged ions. 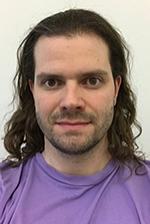