Lara Hijazi completed her Bachelor’s and first Master’s degree in high energy physics at the Lebanese University. She obtained her second Master’s degree at Paris-Sud University within NPAC (nuclear, particle, astroparticle and cosmology) in 2014 where she followed the nuclear physics domain working at the Institute of Nuclear Physics of Orsay (IPNO) in collaboration with GSI Germany. It was related to hadronic physics and studies for experiments with the HADES detector and secondary pion beam. Lara also did internships at CEA Saclay and LAL Orsay.

In September 2014, Lara joined the LA³NET network to work on improving and developing the laser system to be used in the REGLIS device at Spiral 2 facility. 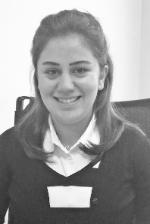