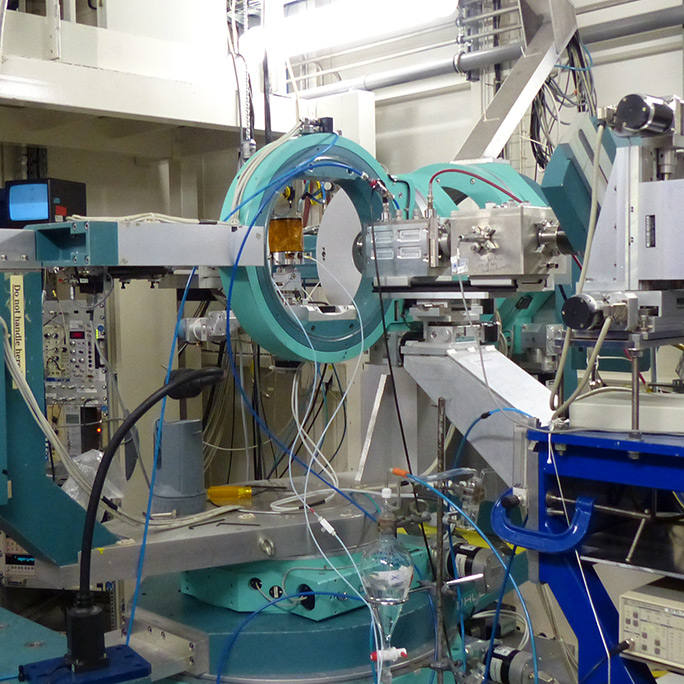 XMaS Beamline at the ESRF in Grenoble

The mid-range facility, managed by the Universities of Liverpool and Warwick,  has a  broad scope with 20 active UK research groups (representing approximately 100 researchers) covering research in materials science, physics, chemistry, soft condensed matter and biomaterials. It contributes  to societal challenges such as energy storage and recovery, the digital economy and advances in healthcare technologies as well as underpinning the UK research infrastructure. The facility operates as a 'collaborative research group' at the European Synchrotron Radiation Facility and is supported by the Engineering and Physical Sciences Research Council.

The universities of Liverpool and Warwick operate the EPSRC funded XMaS beamline (XMaS) which is located at the European Synchrotron Radiation Facility (ESRF) in Grenoble, France.

The project has been supporting the UK science base delivering a broad, interdisciplinary research programme to UK users and their collaborators since 1997. Its research programme covers both fundamental blue skies and applied materials research in emerging technologies. It embraces soft matter, surface physics and chemistry, advanced magnetic materials, conservation of historical artefacts and materials for clinical applications.

The XMaS beamline is run by 5 on-site staff (4 University of Liverpool staff) and is directed by Professor Chris Lucas (Liverpool) and Dr Tom Hase (Warwick). It is currently an EPSRC mid-range facility and is funded until September 2017.

The beamline is situated on a bending magnet at ESRF and comprises a unique combination of instrumentation for high resolution, single crystal diffraction in addition to surface x-ray scattering, small angle scattering and spectroscopic techniques. White beam operation is possible, as well as focussed and unfocussed monochromatic modes. An 11-axis Huber diffractometer facilitates simple operation in both vertical and horizontal scattering geometries. In addition to harmonic rejection mirrors, the beam can be further conditioned by various phase-plates and an in-vacuum polarisation analyser. Standard scintillator detectors, avalanche photodiodes, Si drift diodes and a MAR CCD are regularly used. Two-dimensional pixel detectors (Pilatus, Maxipix) are also available on request. Sample environment ranges from 1 K to 800 K (1200 K on request). A 1 Tesla electromagnet and a 4 Tesla superconducting magnet can be used in either vertical or horizontal scattering geometries. An in-vacuum 0.1 Tesla electromagnet originally designed for low energy x-ray reflectometry studies is also available.

The beamline operates as a UK facility but underpins our work in nanoscience. 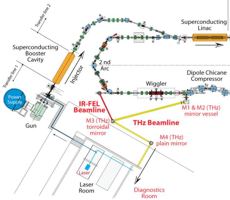 It is clear that research in diverse fields from nanoscience through energy research to next generation healthcare will benefit considerably from the exploitation of accelerator-based light sources. Such sources are either in use or under development in the USA, The Netherlands, Germany, France, Italy, Sweden, Japan, Russia and Korea.

ALICE is the UK’s only 4th generation light source and has unique characteristics that give it advantages over other operating light sources. In particular, it complements the experimental capabilities available to UK users of FELIX supported by the EPSRC.

The accelerator has been commissioned and is operating. Comparable sources in some other countries are still under construction or are still at the planning stage so modest funding would give UK scientists a head start in a wide variety of research fields. ALICE has been constructed a cost of ~ £30Million; in addition a THz beamline and tissue culture facility has been constructed by the University of Liverpool (at a cost of ~ £3Million) and the Cockcroft Institute has supported the construction of an infrared free electron laser (IR FEL) beamline equipped with a world leading SNOM imaging capability.

ALICE currently has two significant advantages over other accelerator based light sources. Firstly, it is the most intense source of broad-band terahertz (THz) radiation in Europe and the only one in the world equipped with a tissue culture facility that satisfies the safety requirements for work on live human tissue and cancerous tissue. Secondly, it drives an IR FEL that is equipped with a state of the art scanning near field microscope (SNOM) that is perfectly matched to the characteristics of the accelerator and which has recently been shown to yield a diagnostic test for oesophageal cancer. Other advantages will undoubtedly accrue as new users develop experimental resources specific to their needs.

ALICE is an energy recovery linear accelerator (ERL), the third of its kind in the world and the only one in Europe. As a fourth generation light source its output of long wavelength electromagnetic radiation is many orders of magnitude superior to that of third generation light sources such as synchrotrons. ALICE is the only accelerator equipped with a terahertz beamline and associated tissue culture facility satisfying the conditions for research on cancerous tissue. It is also equipped with a scanning near field optical microscope (SNOM) on the infrared free electron laser (FEL) on the ALICE accelerator at Daresbury laboratory. 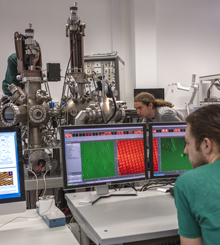 These techniques include XPS, UPS, LEED I-V, STM and IPES. Recently, we have commissioned a monochromated XPS system and one of the stations has been modified to perform in-situ electrochemistry. Having a range of techniques is a key to allowing us to study many types of materials and phenomena, including:

The laboratory is a part of the Stephenson Institute for Renewable Energy. Further details can be found here.

This Laboratory is based in the Stephenson Institute for Renewable Energy and offers a range of equipment.