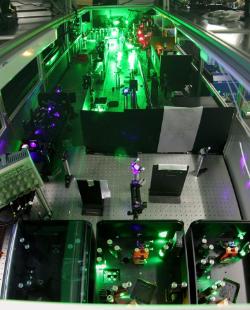 ‌‌‌‌The aim of this project is to improve the efficiency and reliability of the RILIS by developing new ionization schemes and modernizing the optical layout.

‌The laser ion source of the ISOLDE on-line isotope separator is based on highly selective, multi-step resonance ionization by wavelengthtunable lasers. Recently, the addition of a UV pump beam and a set of three Ti:Sapphire lasers opens up possibilities for much broader choices of atomic transitions for the resonance ionization process. 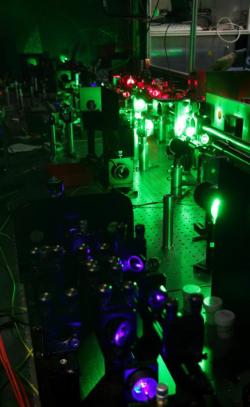 ‌‌The present technologies for generating wavelength tunable laser radiation: dye lasers, Ti:Sapphire lasers and optical parametric generators, will be exploited in the course of this project so hat comprehensive ionization spectroscopy studies can be carried out. The exploration of future laser upgrade possibilities will require close links to the industrial sector.

Irene Martini will work on photoinjector R&D within the CLIC study. Photocathodes capable of producing high current over a long time period are required for production of high brightness electron beams at accelerators.

At present, CsTe photocathodes in combination with UV lasers are usually used for such purposes. Requirements for the sources of electron beams for future accelerators such as CLIC are more challenging and go beyond the performance of currently available UV lasers. However, lasers generating in the visible (green to near infrared) range could be used routinely if appropriate photocathode were available. To this end, different types of photocathodes are to be produced via a thin film deposition technique and studied by photoemission laser probing and surface analysis methods.

In this project, Irene Martini will also be trained in operation, support and development of the laser installations used for photoinjectors at CERN.

Development of a laser emittance meter

The transverse emittance is one of the most important beam parameter at any particle accelerator. To develop an instrument which is able to determine this in a nondestructive manner is the aim of this project.

The parameters of the laser and the required optical components will be determined, the signals induced in a detector will be simulated and the most suitable detector type will be identified; a prototype setup will be designed, built up and tested directly on LINAC4 or on another machine with similar characteristics. 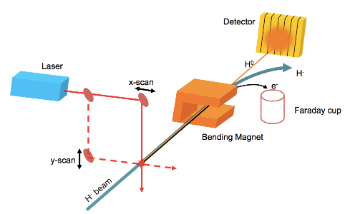 Thomas Hofmann will be familiarized with the concept of a laser wire scanner, laser beam handling and manipulation techniques, as well as critical detector components at the beginning of the project. The timing link between the laser and the beam, together with an envisaged real time monitoring put strong requirements on the photon detectors, the IT and control systems.

The ESR project will be performed with the Lasers and Photocathodes section (LP) of EN-STI group. The LP Section is in charge of laser based particle sources; in particular the ion source RILIS (Resonance Ionization Laser Ion Source) and the electron beam photoinjectors of CLIC Test Facility 3 (CTF3).It maintains a high-level know-how on high power pulsed lasers, and on development of photocathodes for high charge and high brightness photoinjectors.

The Resonance Ionization Laser Ion Source (RILIS) is based on highly selective interaction of laser radiation with atoms, which makes it extremely valuable for extraction of pure ion beams of radioactive isotopes produced at ISOL facilities such as ISOLDE at CERN. In addition to element selectivity, the RILIS is capable of producing ion beams with isomer selectivity, which is unique among the ion source types. Isomer selectivity requires the application of narrow linewidth lasers in order to ensure spectral separation of nuclear isomers due to differences in the hyperfine structures of the atomic transitions excited in the ionization sequence. The isomer selectivity of RILIS has been demonstrated for several examples through the use of dye lasers. The same lasers have also been used for high resolution in-source spectroscopy of radioisotopes. With the recent implementation of solid state Ti:Sapphire lasers at ISOLDE RILIS, new opportunities for an advancement of high resolution RILIS technology are being investigated. Matthieu Veinhard will contribute to the development and optimization of narrow linewidth lasers for high resolution RILIS applications. A synthetic combination of solid state and dye laser technology will be in the focus of the project.

The work on this project will be performed at CERN in collaboration with LA³NET partners University of Mainz (Germany) and GANIL (France).  Matthieu will also have the opportunity to get involved in the overall ISOLDE research activities.