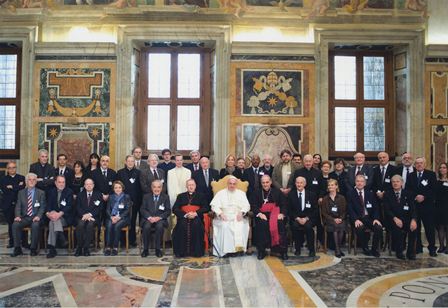 Professor John Gowlett from Archaeology, Classics and Egyptology, visited the Vatican in April 2013 as part of a three-day workshop organised by the Pontifical Academy of Sciences on human evolution.

‘Via Humanitatis’ or ‘The Human Way’ was the theme of a new working group of the Pontifical Academy of Sciences in Rome who sponsor meetings on varied scientific themes. The topics at the workshop ranged widely through the human story from earliest ancestors to the emergence of consciousness and conscience.

John spoke on the evolution of human fire use, presenting evidence from Africa and Europe to more than 20 scholars from around the world. Other speakers discussed earliest tool-makers, earliest burials, the roots of language and ethics, and the first appearance of modern humans. Professor Gowlett said: “The Academy is entirely independent of the church in its methods and approaches, but aims to provide authoritative advice. The particular theme of ‘the human path’ fits well with the Academy’s goals of working to advance the human and moral dimensions of humankind.”