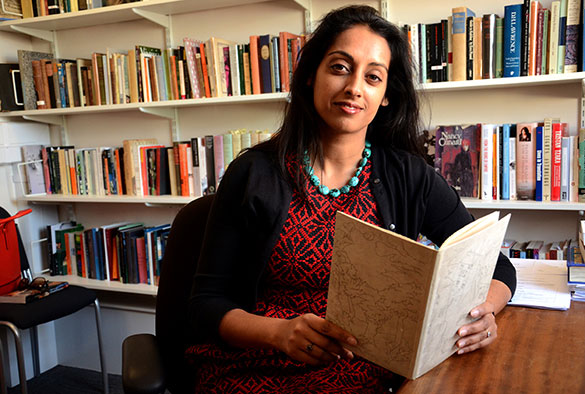 Based in the Department of English, Sandeep is a poet and critic of contemporary British and American poetry as well as a researcher in Modernist Literature. Her research interests are primarily British and American women’s writing of the early 20th century, Modernism, women’s autobiographical writing and the literary archive. More specifically, her research focuses on lesser-known, non-canonical modernist women writers such as Nancy Cunard, Hope Mirrlees and Mina Loy, as well as their more famous contemporaries. She teaches contemporary British and American poetry (post 1930) and is particularly passionate about bringing a diverse sense of those canons to her students by reading ethnic minority poets and experimental poetry for instance.

Earlier this year, Sandeep was  appointed AHRC/BBC Radio 3 New Generation Thinker 2015 and has  become the University of Liverpool’s fourth New Generation Thinker in the five years since the scheme was launched, following in the footsteps of her colleagues from the English Department, Dr Alexandra Harris, Professor Nandini Das and Professor Sarah Peverley. This scheme, which is a partnership between the AHRC and BBC Radio 3, is a nationwide search for academics who can demonstrate their passion to communicate modern scholarship to a wider audience and have the potential to share their cutting edge academic ideas through radio and television.

This is a wonderful opportunity. I am looking forward to rethinking the research that I do and coming up with ways to make it even more interesting.

Sandeep said: “This is a wonderful opportunity. I am looking forward to rethinking the research that I do and coming up with ways to make it even more interesting. I’m so proud to be part of the English Department; all of my colleagues bring their tremendous knowledge and passion for research to the classroom and that’s one of the reasons we have had so much success becoming New Generation Thinkers. ” In November,  Sandeep will take part in the BBC Radio 3 Free Thinking Festival about British poetry and race, and considering how BME voices are represented in mainstream and avant-garde British poetry.

Sandeep is also the co-director of the Centre for New and International Writing where she supports the promotion of international poetry and poetry in new and innovative forms (textual or digital). Launched in March 2015, the Centre hosts the Miriam Allott Writers series. From working with journalists in the national and international press to highly-acclaimed novelists and poets from around the world, this series aims to engage with Liverpool’s vast cultural and literary heritage.

Sandeep’s latest book is on the unpublished autobiographies of the modernist poet Mina Loy, Reading Mina Loy's Autobiographies: Myth of the Modern Woman (Bloomsbury, 2015). She is currently writing and researching a novel about wheat cultivation during the Green Revolution in India, for which she received an Artists’ International Development Fund award from the British Council and Arts Council England. She is also writing a biography of the British modernist poet and novelist Hope Mirrlees and editing her out-of-print novels.

To find out more about Sandeep’s work, you can follow her on @SandeepKParmar and read some of her poems on www.poetryarchive.org/poet/sandeep-parmar.