A Science and Healthcare Perspective

Though there is a degree of personalisation to individuals in prescribing of medicines in the NHS, there are clearly some limitations.  The key problems are in the attainment of efficacious drug and dose and also in avoiding adverse effects.  These are issues not only for the NHS but for every healthcare system in the world.

Adverse effects to drugs are a major problem for the NHS. In one of the largest studies ever performed, we were able to show that 6.5% of all admissions to our hospitals are caused by adverse drug reactions, and at any one time, up to seven 800-bed hospitals are occupied by patients admitted with adverse drug reactions.
There is increasing evidence to show that part of the variability in how we respond to drugs is determined by genetic factors.  This is the area of research called pharmacogenetics.  This can be defined as “the study of the genetic basis for the difference between individuals in response to drugs”.

The term “pharmacogenetics” was coined by a German Pharmacologist, Friedrich Vogel, in 1959.  In the 1960s, Price Evans in Liverpool undertook pioneering studies which showed the importance of an enzyme called N-acetyltransferase in metabolising drugs such as those used in TB. At least 50% of the UK population lack this enzyme and are termed slow acetylators.  Another key discovery was of variability in phase I metabolism.  Robert Smith in London and Michel Eichelbaum in Stuttgart were able to show that about 5-10% of the Caucasian population have a deficiency of CYP2D6 (also called debrisoquine hydroxylase or sparteine oxidase).  This enzyme is responsible for the metabolism of about 25% of the drugs in the British National Formulary including those used to treat heart disease, depression and schizophrenia.  The molecular basis of this deficiency was identified by Roland Wolf and his team in Scotland more than 15 years ago – this has formed the basis of rapid tests that are now available including a “gene chip” which can simultaneously identify 29 mutations in the CYP2D6 gene.

So where are we with pharmacogenetics at the present time?  There has been renewed interest in pharmacogenetics following the completion of the human genome project.  Coupled with the HapMap project, which provides an indication of the degree of variation in human populations, we now have free access to an enormous amount of information on the basic building blocks of life; this now has to be harnessed for the good of the health of the population.  This includes the development of personalized medicines which has been acknowledged as one of the first likely positive outcomes of the human genome project.  There are also rapid advances in technologies to sequence DNA and to identify variants in the DNA. While it took several years to sequence the first human genome at a cost of millions of dollars, it is anticipated that it will be possible in the near future to sequence the whole human genome in less than 24 hours at a cost of US $1000.

The freely available information on the human genome together with the rapid advances in technologies puts the scientific community in a powerful position to translate this into better healthcare. This is the big challenge: it should not be under-estimated.

There are already examples of how pharmacogenetics is helping some patients.  The most recent is in the field of HIV therapy.  Abacavir can cause a serious side effect called hypersensitivity – this is a condition where the patient develops a rash, fever, respiratory and bowel symptoms within 6 weeks of starting the drug. If the drug is not stopped, the patient will deteriorate and may die.  In 2002, a gene called HLA-B*5701 was identified as a predisposing factor in Caucasians in Australia (Mallal, S. et al 2002).  This finding has been replicated in patients from North America and the UK (Hetherington, S. et al 2002), and more recently in non-Caucasian populations (Hughes AR et al 2004).  Many HIV clinics are now using this genetic test before they prescribe abacavir, avoiding it in patients who are positive for this gene (by giving them an alternative agent).  Data from both Australia, UK and France has shown that the use of this test has reduced the frequency of hypersensitivity.  A fear of governments and healthcare systems is that the use of genetic tests will increase the costs of healthcare, which may be detrimental to other aspects of healthcare, since we do not have limitless resources to fund the NHS.  However, a cost analysis of the use of HLA-B*5701 to prevent abacavir hypersensitivity has shown this to be a cost-effective use of resources (Hughes, DA et al 2004). A randomised controlled trial (PROSPECT) has demonstrated the utility of pre-prescription genotyping (Mallal, S. et al 2008).  This genetic test represents a superb example of how the first finding in laboratory can be translated into a clinic in less than 5 years for the benefit of patients.

So how likely is it that we will be able to use genetics to personalise medicines for all patients in all disease areas?  It is already apparent that not all areas of prescribing will be as clear-cut as the abacavir case illustrated above. ,  Most drug response determinants will be multi-genic and multi-factorial, and we will have to deal with this biocomplexity in developing the predictive algorithms of the future.  This is already evident with the anticoagulant warfarin.  What we now require is well designed research which will gather information on where pharmacogenetics will be important, and how we can then translate the potential benefits into tangible benefits that improve drug therapy.  Indeed, some commentators have suggested that, in the future, we will all carry SMART cards, which will contain our genetic information.  Using these SMART cards, a GP will able to prescribe the right drug at the right dose at the right time in order to ensure that it works effectively and does not cause serious side effects.  This is achievable, but a lot of hard work and significant financial investment will be needed to realise the future. 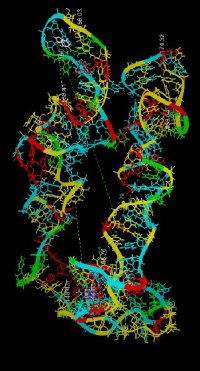 The CYP2D6 enzyme, responsible for the metabolism of about 25% of common drugs.

The freely available information on the human genome together with the rapid advances in technologies puts the scientific community in a powerful position to translate this into better healthcare.