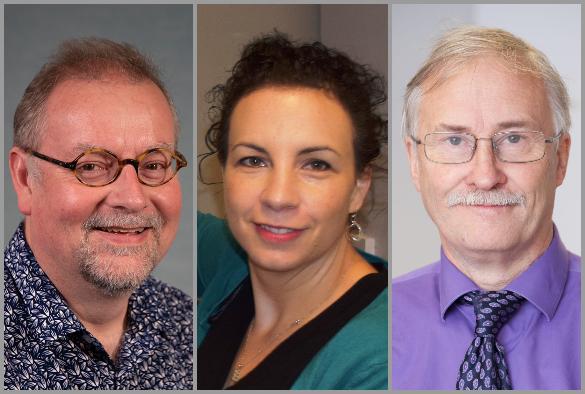 Three academics from the University’s Institute of Systems, Molecular and Integrative Biology have been named among the world’s most influential analytical scientists.

Professors Roy Goodacre, Claire Eyers and Ian Wilson from the Institute's Department of Biochemistry and Systems Biology have all made The Analytical Scientist Power List 2021, which celebrates the tremendous range of talent, ingenuity and leadership within analytical science across the globe.

Winners were nominated by readers of The Analytical Scientist with the final top 100 selection made by a panel of independent judges.

Professor Roy Goodacre features in The Power List for an impressive third year in a row. Having trained in both microbiology and mass spectrometry, Professor Goodacre is a co-director of the Centre for Metabolomics Research and leads the Laboratory for Bioanalytical Spectroscopy. He was a founder of both the Metabolomics Society and the scientific journal ‘Metabolomics’, of which he is currently Editor-in-Chief.

Professor Claire Eyers makes her debut on The Power List this year. Her work in biological mass spectrometry focuses on proteomics method development and application primarily in the area of cell signalling and disease. Professor Eyers is director of the Centre for Proteome Research and Associate Pro Vice Chancellor (Research and Impact) for the Faculty of Health and Life Sciences.

Professor Ian Wilson was recently appointed as an Honorary Professor in the department and is part of the Centre for Metabolomics Research. His research involves the study of drug metabolism and molecular toxicology using state of the art analytical techniques. He is also Professor of Drug Metabolism and Molecular Toxicology at Imperial College London.

Professor Sonia Rocha, Executive Dean of the Institute of Systems, Molecular and Integrative Biology, said: "This is a much-deserved recognition and honour for these brilliant colleagues we have in the Institute. They are an inspiration to us all and not only they are incredible scientists they are also very generous colleagues and mentors. We are very proud and lucky to have them."