Timeline of the 2020 vomiting outbreak.

Information below refers to the vomiting outbreak in 2020 only and should currently not be used to refer any suspected outbreaks thereafter.

SAVSNET is unable to provide advice on individual cases and we urge owners worried about their dog to contact their veterinary practice.

Our paper is now published but that doesn't mean our work is over. Since the outbreak last year, we have continued to monitor incoming data from veterinary practices taking part in SAVSNET so that should we see signs of a repeat outbreak, we can inform the profession and dog owners.  Our colleagues at Lancaster University are perfoming statistical modelling to assess the data received and we hope to be able to share some images from their work soon.  There are some local areas of interest that we are continuing to closely monitor but the good news is that currently, we are not seeing signals of a national outbreak.

This graph summarises the fate of the outbreak well - using unwell pets as a denominator to smooth out the effects of the lockdown.

It appears the outbreak of profuse vomiting is over. With lockdown, measuring the proportion of all cases seen for gastroenteric disease is difficult because of the massive change in numbers of consults particularly those for healthy animals (heath checks and vaccinations). So here we have plotted the proportion of unwell animal consults that are gastroenteric disease in dogs (with the same plot in cats for comparison).

Thank you to everyone who participated in this research.

It appears that the proportion of records identified as  gastrointestinal disease is nearly back to normal average levels. We will continue to monitor for changes in reporting of gastrointestinal disease and records mentioning acute severe vomiting to see if this likewise decreased and we will check our statistical models (developed at Lancaster University) to see if all our measures are back within normal limits.

Thank you to those of you who have submitted samples from cases and controls.  Our colleague Shirley Bonner has been working hard with these samples to look for potential infectious causes of this outbreak.  Our preliminary analyses suggests a potential role for a canine enteric coronavirus (CECov).  We have published this now for two reasons: 1) because vets have talked about a role for a coronavirus in the outbreak and we feel it is important to emphasise that whilst CECov is a coronavirus, it is not closely related to human coronaviruses including SARS-CoV2 (the cause of COVID-19).  2) we feel it is important to let the wider scientific community know so they can build on these observations.

Currently the number of records tagged as gastroenteric disease appears to be returning to a more normal proportion for this time of year suggesting that the outbreak is resolving. We will keep watching to see if this is true on a regional basis.  You can find out more about CECoV here.

SAVSNET monitoring of consultation counts where the vet considers GI disease as the main reason for presentation appear to continue to fall as a total in SAVSNET practices.  If your practice sees cases, please continue to report them to us so we can understand the behaviour of this outbreak.

Based on statistical analysis by colleagues at University of Lancaster it is clear that the current pattern of gastroenteric disease in dogs in the UK is outwith normal, and therefore the SAVSNET team are now able to officially call this an outbreak.

The amount of records where our contributing vets thought the main presenting complaint was gastrointestinal disease (GI mpc) or matching text searches for words associated with(Discussion of severe vomiting) appears to have dropped off a bit this week but still seems higher than normal.  We are monitoring this closely and have contacted veterinary practices who appear to be seeing an increase in cases with gastrointenstinal disease to remind them about collecting samples.  We are incredibly grateful to all the vetetinary practices who have sent samples to us, and the owners who have helped with our investigation. 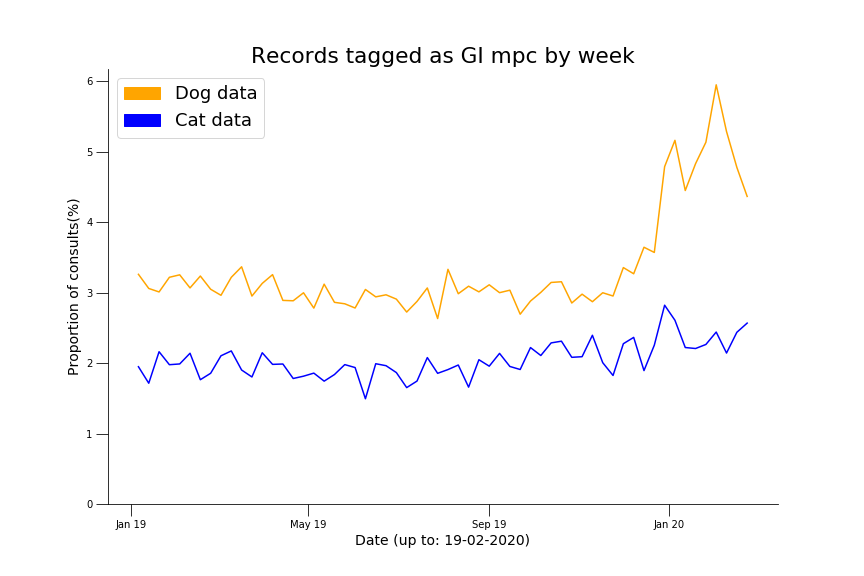 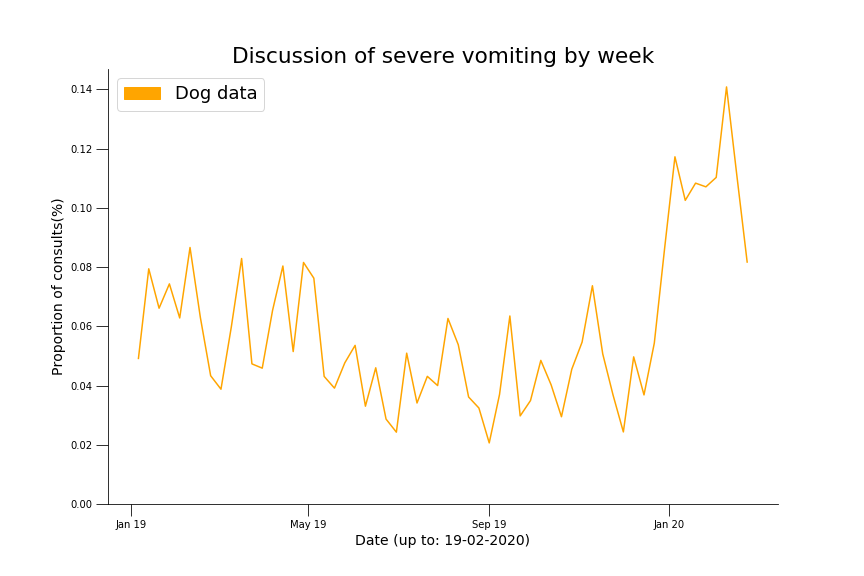 We have been watching the average number of consults reported as gastrointestinal disease per week to get a feel for the number of cases of prolific vomiting being reported as a proportion of all consults. When we look at the absolute count of the consults, the signal is much messier due to variation in the number of vet-visits on each day of the week but there is a strong suggestion that the number of cases is decreasing towards a more normal baseline. This is the total national data and we are investigating whether in some places the potential outbreak is over whereas in others it may still be on-going. 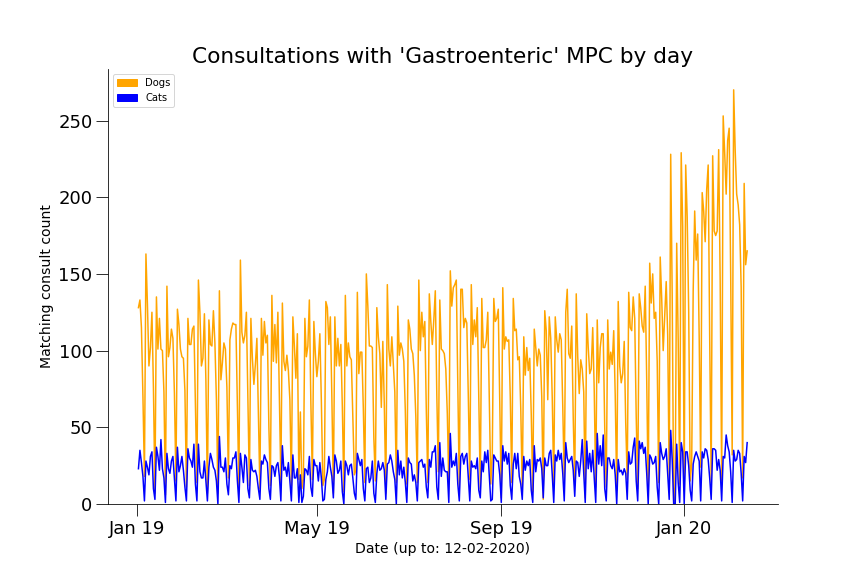 Our current track of gastroenteric signs suggests a slight fall in the number of dogs presenting for primarily gastroenteric disease to practices participating in SAVSNET. We note a similar drop occured earlier around the new year so we can't yet say for certain this potential outbreak is coming to an end. Clearly we will continue to monitor this and other signals in the coming days. 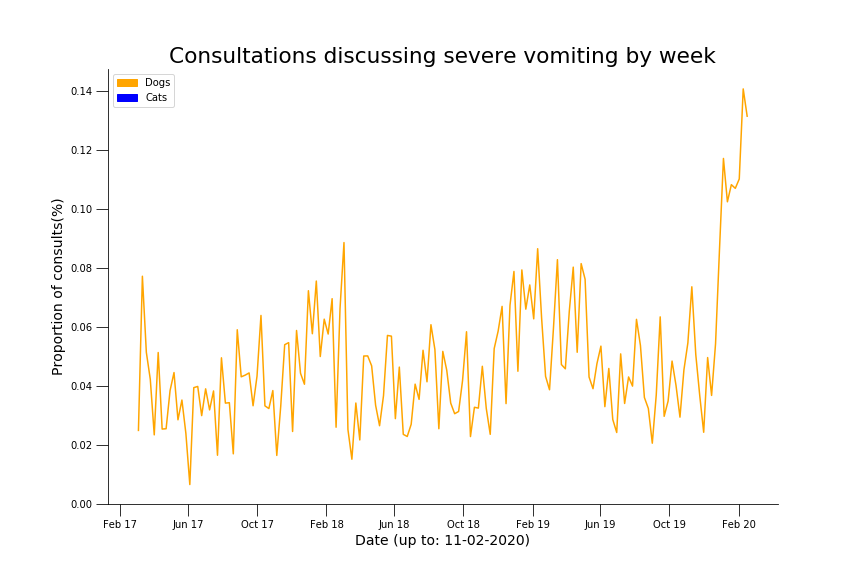 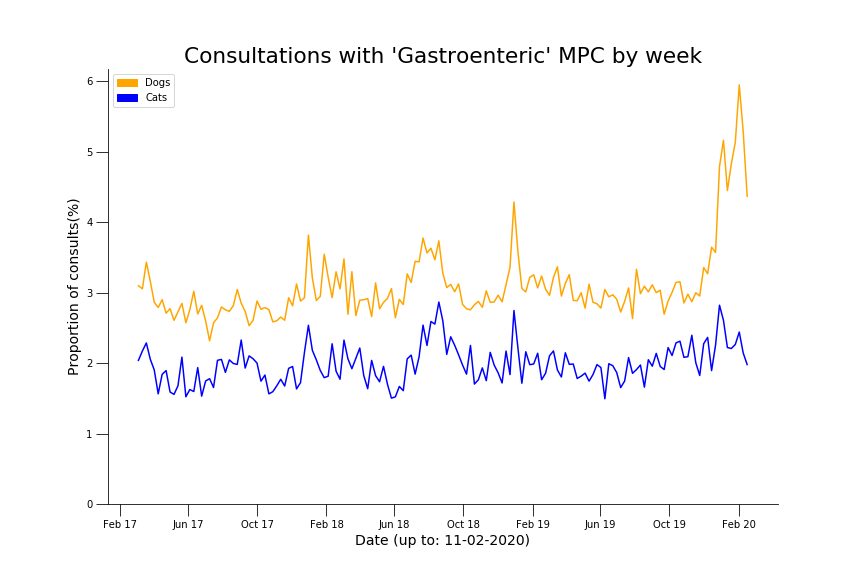 The heat map shows the veterinary practice location of cases reported by veterinary professionals and owners, with yellow corresponding to points of greatest case report density. These findings suggest that while cases have been reported throughout England, Wales, Scotland and Northern Ireland, there might be some geographical hot spots. Currently, these appear to be in North West England, the Midlands and Southern England.  This map uses data up to and including 9th February 2020. 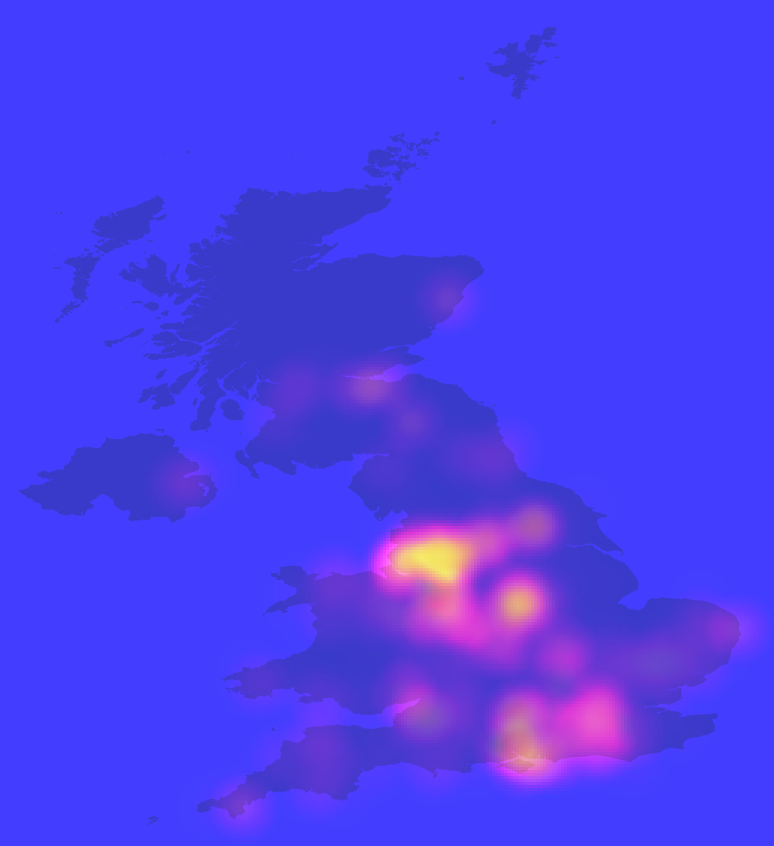 Veterinary practices are reporting quite widespread disease throughout England and Wales, particularly localising in North West and Southern England, with a small number of reported cases originating from Northern Ireland and Scotland.

We are asking vets across the country to continue to complete case and control questionnaires, and contact us if they are willing to submit samples from cases.  Without these samples, we cannot fully investigate the aetiology.

With colleagues at Lancaster University, we are conducting statistical analysis to try and identify when and possibly where the increase in gastroenteric disease seen by SAVSNET started – refer to update below on 3rd February 2020.

To date (04/02/20), we have received 474 case questionnaires gathered through the SAVSNET website since it went live on 30/01/20 that have met the case definition. Of these 474 cases, 59 are current and 415 are retrospective. These figures encompass owner and veterinary practitioner reports. Approximately 60 cases have been reported by veterinary practitioners.

Vet practices are reporting quite widespread disease throughout England and Wales, with one report in Northern Ireland. So far, there have been no veterinary practitioner disease reports in Scotland though there have been some owner reports.

Affected dogs are reportedly rarely pyrexic, with a minority reporting blood in vomit or faeces. Approximately 90% of affected dogs were vaccinated in the last three years. Of owner reports, 83% of dogs are fed proprietary food and 18% are fed raw food. Dogs typically make a full recovery with symptomatic treatment in 3-7 days, with four owner reports of death, though it cannot be ascertained at this time whether these deaths are associated with the condition under investigation.

There is no reported disease issue in owners of affected dogs or other people. Around half of households own more than one dog; about 60% of these households report more than one dog to be affected, which may indicate transmission or exposure to a common cause. Information is being compiled to identify potential risk factors or aetiologies.

We have been reviewing the data submitted by veterinary surgeons to the SAVSNET project in a couple of different ways to establish the potential distribution of cases and the in numbers of animals that may be involved.

Whilst there appears to be a signal corresponding to a change in the occurrence of vomiting in dogs, the data shown below are only preliminary and are currently being validated by our colleagues in Lancaster University.

Vets taking part in the SAVSNET project routinely record the main reason for presentation. The proportion of consultations about gastrointestinal (GI) disease for dogs and cats is shown for the last three years, suggesting a strong upsurge in the proportion GI cases at Christmas this year.  This may occur because people tend to take their pets to the vet over Christmas when they are ill rather than for routine vaccination etc. This increased proportion appears bigger this year for both dogs and cats but is sustained and rising for dogs.

Using text-mining tools, we have counted consultations mentioning severe vomiting looking for text like: “profuse vomiting”, “vomiting frequently”, “v+++”, “severe vomiting”. This kind of text-mining generates a ‘noisy signal which has been smoothed out to look for trends. In dogs there appears to be an increase in mentions of severe vomiting since December which is not seen in cats.

Responses that meet the criteria of ‘dog has vomited at least five times in a 12 hour period': 110

Based on responses received to date, most dogs have been vaccinated within the last three years. Most dogs vomited without blood and show inappetence.

Responses for retrospective cases indicates that recovery is most common in 3-7 days.