The wakes generated by helicopters or wind turbines could interfere with passing-by aircraft. A number of serious and fatal accidents have so far been reported when light aircraft entered into a helicopter wake resulting in loss of control. These accidents often happen near airports where helicopters are in hover-taxi, and the encountering aircraft is landing or taking off. This means that both the helicopter and the fixed-wing aircraft are at low altitude, and at relatively low speed. This type of wake encounter scenario has its own specific features, and the wake vortices have their characteristic structure, duration and decay.

Similarly, with increasing sizes of the wind turbine

rotors, the strength and influencing region of their wakes increase, and this might potentially generate risks to nearby flying aircraft.

The above, motivated the current work where a wake encounter study using engineering wake modeling, CFD

, LIDAR field measurement and piloted flight simulation was carried out.

were used for wind turbine wake predictions and were validated with wind tunnel data and field measurements.

LIDAR field measurements of the wake flow of a WTN250 wind turbine (installed near the East Midlands Airport,UK) were coordinated by CAA and supported by SgurrEnergy. Wake measurements of helicopters in hover and hover-taxiing, were also carried out by JAXA, and the data is exploited with the University of Liverpool.

Off-line flight simulation analyses were applied to wind turbines to determine aerodynamic loads and excursions of attitudes of the aircraft during wake encounters. The wake induced crosswinds on the aircraft were also analysed.

For the landing scenario, the existing wake encounter criteria and severity metrics for the determination of hazardous distances might not be appropriate if the wake encounter occurs close to the ground. The landing simulation results suggest that for a helicopter in low-speed hover-taxiing (less than 40 kt airspeed), the wake encounter detectable horizontal distance is about three times the diameter of the rotor, which coincides with the current safety guidelines of the Civil Aviation Authority of the UK. The level flight simulations revealed the effects of the vertical separation distance and of the wake decay on the encounter severity.

LIDAR data statistically indicate that the effects of the WTN250 and smaller wind turbine wake, in terms of velocity deficit, are limited within a downwind distance of 5D. This is, broadly, in agreement with the results of  full  CFD

analyses and velocity deficit models. The piloted flight simulation results suggest that, for the employed small wind turbine, the wake generated minor upsets on the aircraft if only the disturbances caused by wake velocity deficits were taken into account. 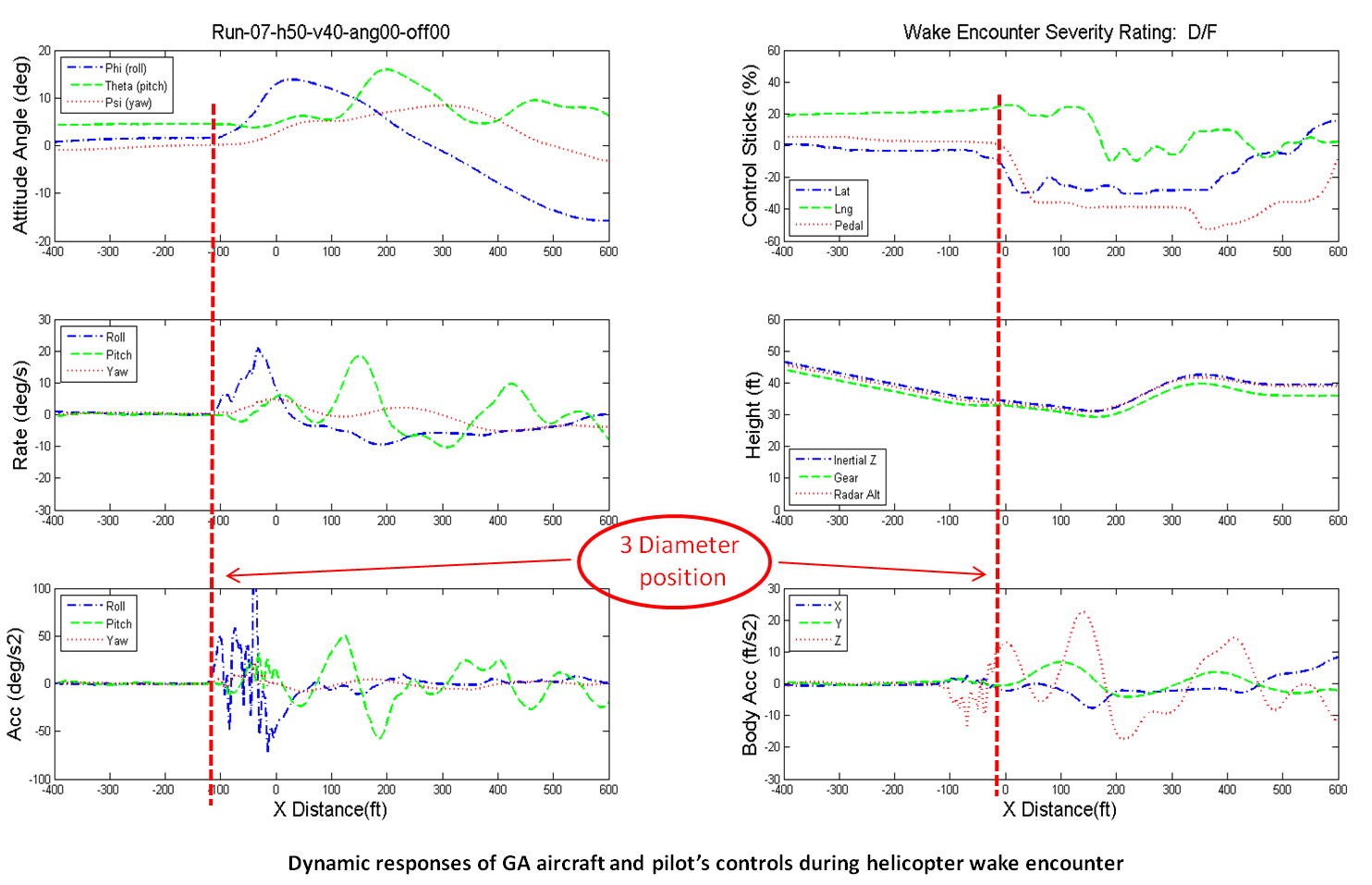 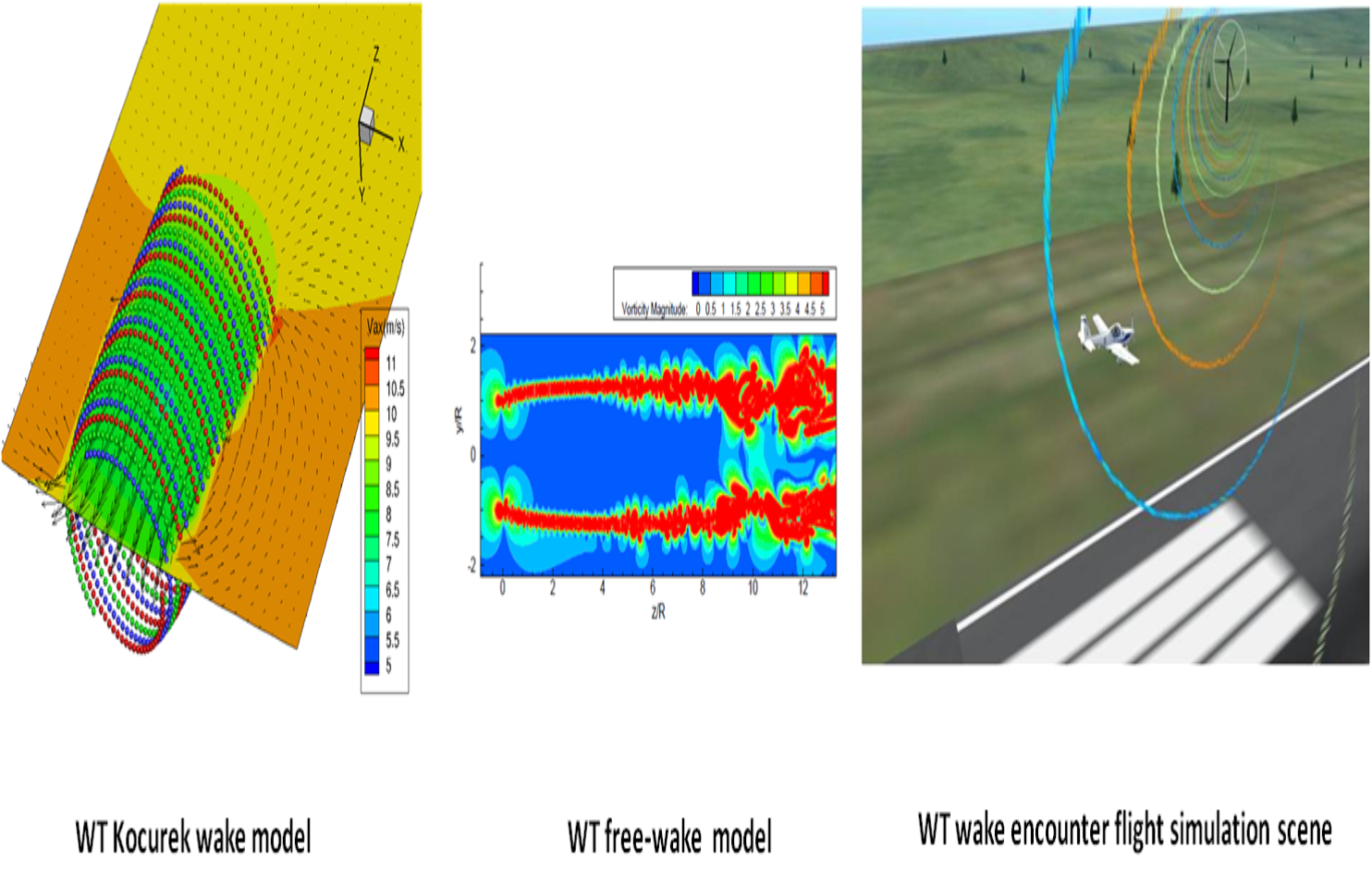 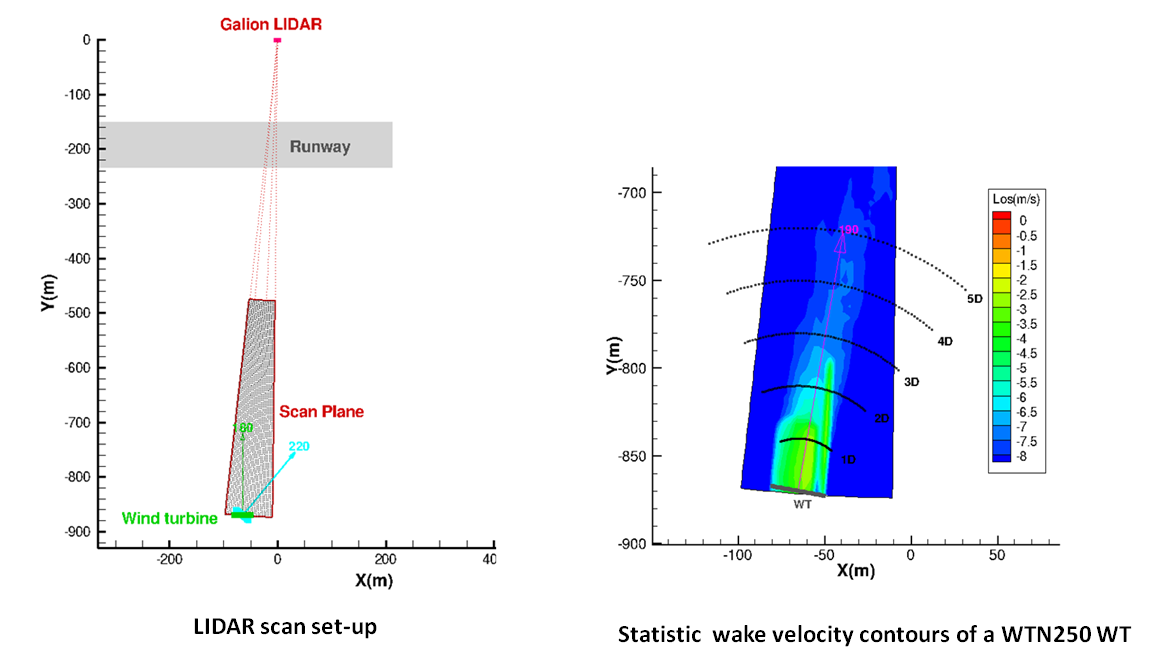