During the past 50 years, the scientific community attempted to answer some complex questions about the tilt-rotor aircraft. This new type of vehicle is presented as an alternative to helicopters, and has the capacity to combine vertical take-off/landing capability with high speed cruise. This result in a compromise in many aspects of design, since the same blade has to operate as a helicopter rotor in hover and as propeller in forward flight. In addition, interactional aerodynamics can be very important in tilt-rotor aircraft, which should be extensively studied and researched to improve safety and performance. This work will employ CFD for the study of tilt-rotors and wind tunnel data will be used for validation.

‌Numerical simulations using HMB2 were performed on a 1:8 scaled rotor-free model of the ERICA tiltrotor (Enhanced Rotorcraft Innovative Concept Achievement) at different flight test configuration, free-stream Mach number of 0.129 and attack angle of -2, -1 and 0 degrees. Experimental test campaign carried out at the Politecnico di Milano in the framework of the European project NICETRIP. The composites of the fuselage and nacelle have been combined through a wing, which interconnects both grids, using overset method. To reduce the computational cost of the numerical simulation, half model of the tiltrotor has been computed, applying symmetrical boundary condition at the symmetry plane. Figure 1 shows the surface pressure coefficient at 0 degrees of attack angle. It is remarkable that moth values of Cp are found at the critical part of this configuration such as junction wing-nacelle and horizontal stabiliser. Figure 2 shows a comparison of the surface pressure coefficient on the upper surface of the wing at 0 and -2 degrees of attack angle respectively. 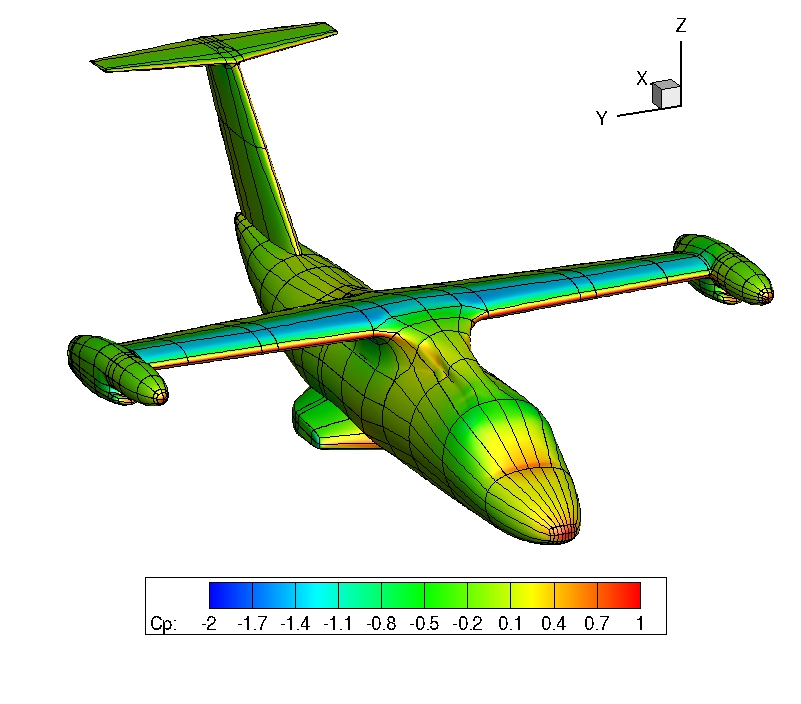 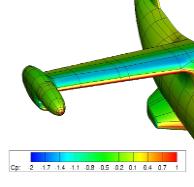 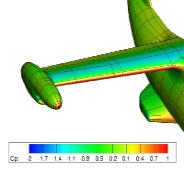