The objective of the project is the investigation of the flow around the main rotor blade of a helicopter and its control using active elements on the blade surface. This is driven by the need to enhance rotor performance and extend the helicopter flight envelope beyond what is possible with traditional blade shape optimization. Possible active elements include micro-tabs driven by piezoelectric actuators, micro jets or synthetic jets morphing blade sections compliant surfaces and even active blade twist or large control surfaces of the likes of trailing edge laps or leading edge slats. The risk of deploying such devices on helicopter rotors can nowadays be mitigated by the use of advanced numerical simulation performed on massively parallel computers. The results of such simulations could lead to a reduced number of experiments and less risky flight tests on real aircraft.

At the beginning of the project a baseline rotor blade design was adopted. A realistic shape was obtained from the industrial partners of the project and this allowed for most geometric features of a real blade to be included in our CFD models. The aerodynamics of the rotor in hover and forward flight were obtained and compared against flight tests.

A comparative study was conducted regarding the potential effect of the three flow control devices on stall alleviation: (a) Gurney flaps, (b) vortex generators, and (c) air-jet vortex  generators. It was proved that a carefully designed actuation schedule of the Gurney flap can result in the same positive effect that the vortex and air-jet vortex generators have at high angles of attack, while at the same time, the very important positive effect of the flap at low angles will be maintained. This will result at higher L/D ratio and the performance of the blade
will be improved.

Since the thickness has a secondary role in the Gurney flap aerodynamics the Gurney flap was modeled as a discontinuity in the mesh. The idea is to flag any cell face within the computational mesh with a solid, no slip boundary condition. Hance the infinitely thin Gurney can be approximated by "blocking cells'' in the mesh. The results presented for various test cases suggest that the method is simple and efficient and it can therefore be used for routine analysis of rotors with Gurney flaps. Moreover, the current method adds to the flexibility of
the solver since no special grids are required and Gurney flaps can be easily implemented.‌
Numerical simulations for selected cases of flight were performed for the selected rotor, and an optimal active gurney flap was designed in order to delay the separation of the flow and improve the hover performance at the same time. The basic idea is that the flap will be actively actuated in forward flight and will be fully deployed in hover flight.

Flow separation control devices, such as the Gurney flap, can have significative influence on the helicopter trimming characteristics and on its handling qualities. To understand  the  dynamic behaviour of the helicopter  when flow control is active, we developed the in-house code Helicopter Flight Mechanics (HFM), which embeds a simplified  aerodynamic model of the Gurney flap and enables to simulate the free flight of a helicopter or to compute trim states. Moreover, HFM implements an autopilot based on a  LQR  (Linear Quadratic Regulator), to simulate the effect of the Gurney flap on the required helicopter inputs for performing specific manoeuvres. Visual renders of the simulated  manoeuvres were obtained with a separate software based on the VEGA Prime library.

The final step will be the observation of aerodynamic characteristics of the actuator and the prediction of the overall behavior of the blade fully instrumented with the active system by coupling the flow and structural solvers. A generic helicopter model will also be built in FlightLab in order to test how the active Gunrey flap affects its monoeuvrability. 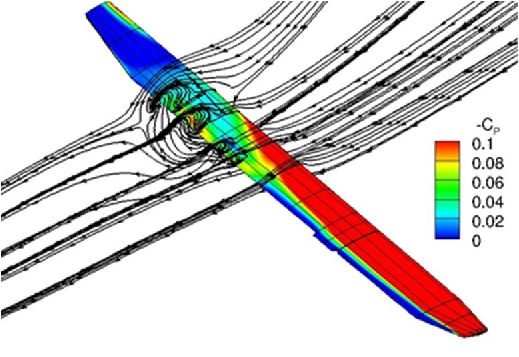 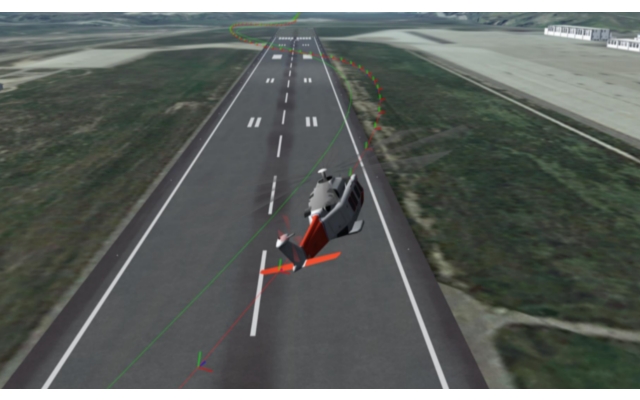