When the flow past any solid object, a thin region adjacent to the wall is created and is due to the friction between the fluid and the wall of the solid. This region is known as boundary layer and is dominant of viscous effects. The boundary layer starts from the stagnation point and gradually thickens downstream along the surface. Inside this region, there are areas where the fluid moves in ordered and layered streams (laminar flow) and where a more chaotic motion exists (turbulent flow). These two areas are joined by regions of transitional flow in which instabilities inserted in the laminar boundary layer result in the breakdown of the ordered flow structure into turbulence. These instabilities can be either generated from the surface itself like roughness or be imposed into the boundary layer like acoustic waves, particles in the flow or pressure fluctuations. 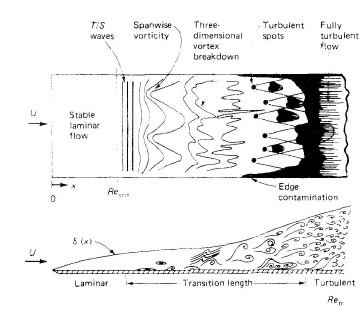 Description of the boundary layer during natural transition process[1].

While many of the underlying instability mechanisms that trigger the onset of transition are understood, numerical modelling of transition flow is a challenging subject. There is a significant amount of researchers working on the development of transition modelling.

Another way of predicting the onset of transition, is the use of simple empirical correlations derived from observed trends in experiments. The Michel criterionMichel criterionMichel criterion, the Cebeci-Smith model and the Abu-Ghannam and Shaw model‌ are some of them. These criteria correlate the momentum thickness Reynolds number with the local Reynolds number. Although these models show a reasonable degree of accuracy especially for flows similar to the initial conditions, they suffer from being non-generic as they usually require the integration of flow variables along the streamwise direction.

Lately, a lot of interest has been attracted into models based on transport equations. Concern is given at the recently developed model of Langtry and Menter. The γ-Reθt model solves two extra partial differential equations similar to the two-equation κ-ω SST turbulence model in which is integrated. The first one is for the scalar variable of intermittency which varies from 0 (laminar flow) to 1 (fully turbulent)  and the other one for the momentum thickness Reynolds number . Altough this model is based on local information, it is not free of empirical correlations and require longer CPU times. 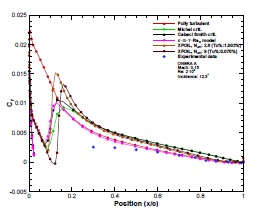 Skin friction distribution for the ONERA A aerofoil. Comparison between the HMB and XFOIL codes with the experimental data. The HMB results are derived considering fully turbulent conditions, Michel’s criterion, Cebeci Smith method and κ −ω −γ −Reθ t transition model. For XFOIL, Ncrit = 2.6 and 9 were considered. (M = 0.15,Re = 2×106)
‌ 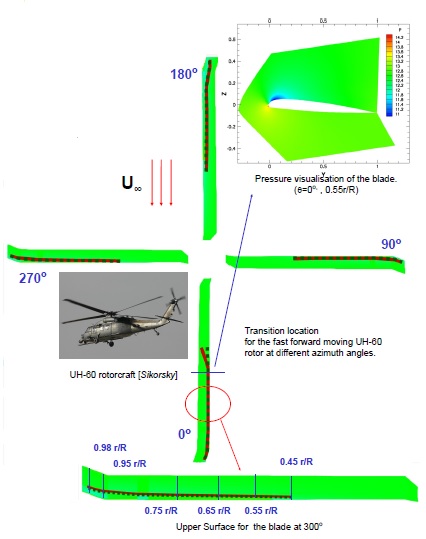 Transition is a complex phenomenon and plays an important factor in determining the performance of a helicopter. Therefore the aim of this project is to improve the predictions and show the importance of the transition modelling for CFD calculations.

A number of transitional models has been proposed in the literature and are implemented in the Helicopter Multi-Block (HMB) solver, a development of the Liverpool CFD group. Starting from simple transition prediction approaches like Michel criterion and Cebeci and Smith method until the implementation of of the original intermittency based transport model of γ-Reθt model.

A range of experimental data has been selected from simple flows around aerofoils to complex ones like the flow around helicopter fuselage or hover/fast forward moving rotors. For the selected aerofoil cases, the computations were also compared with the XFOIL code.  Shown below are the transition onset predictions for laminar flow aerofoils (ONERA A and NACA 0012 ) , ROBIN fuselage and UH-60 rotor in fast forward move.