Sexuality in the Past: Niankhkhnum and Khnumhotep

Despite living in our modern age, members of the LGBTQ+ community have been and continue to be subjected to forms of prejudice and oppression, from insults, to suppressive laws and legislation. But did these prejudices and a lack of understanding for LGBTQ+ people occur in the ancient past? Within this blog I explore Egyptologists’ findings from the joint tomb of Niankhkhnum and Khnumhotep, and how examining the past can help to create a more inclusive present.

The 5th Dynasty tomb of Niankhkhnum and Khnumhotep, located in Saqqara, has been subject to much debate amongst Egyptologists, namely concerning what the relationship was between these two figures who share a tomb.

One argument is that this is the tomb of a same-sex couple. This is based on the nature of the iconography we can see within their tomb, with many depictions of the two men embracing, holding hands, and potentially kissing. Scholars supporting this view have argued that such scenes and poses normally depict a husband and wife in the tomb, making this choice of depiction unusual. This argument is strengthened by the position of Khnumhotep in many of these scenes, placing him in a position normally reserved for women, such as one scene in which he is shown smelling a lotus: one of only three men shown doing so in tomb scenes from the 5th Dynasty. With no text in the tomb explicitly defining the relationship between these two men, this possibility cannot be ruled out. 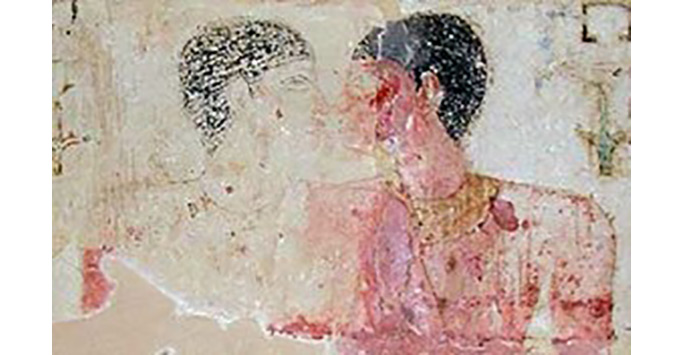 On the other hand, there are many arguments to show this is not the case, with other scholars arguing that these tomb sharers are in fact twins. This is argued as the men are also depicted with their wives and children in some of the scenes within this tomb, and the possibility that such intimate images are depictions of a ‘homosocial’ nature. The difficulty in identifying this is caused by the cultural differences in what is considered non-sexual intimacy between men in the society of ancient Egypt and that of now. Again, the lack of explicit mention of their kinship relationship does not mean this possibility is untrue, as it is common for these terms to not be mentioned in tombs, again leaving this as a possible argument.

The overall issue with these arguments is that they are set too heavily within the contemporary ideas of today. To dismiss the possibility entirely of same-sex desire being the case here may give in to the heteronormativity of many modern social attitudes. Whilst outright labelling such a relationship as ‘homosexual’ relies too heavily on modern labels and bases many judgements on our own ideas of what intimacy looks like within sexual relationships. Without any explicit evidence to define the identities of Niankhkhnum and Khnumhotep, we can make no assumption either way, and to do so may simply place our own subjective views on the past.

While we may never truly understand the nature of the relationship shared between these two individuals, that does not mean we are not allowed to identify with these figures from the past.

The possibilities of same-sex attraction being shown within historical evidence, and the clear differences in intimacy and types of relationships that can be seen compared to our contemporary Western society, may help society to be more open minded to relationships in the present.

As such, we should not be afraid to express sexualities and genders that transgress the 'norm', as the only thing preventing societies from allowing such diversity and expression are mindsets.

Tamar is an undergraduate student of Egyptology at the University of Liverpool.

Study in the Department of Archaeology, Classics and Egyptology at the University of Liverpool