The High-Luminosity Large Hadron Collider (HL-LHC) project aims to crank up the performance of the LHC in order to increase the potential for discoveries after 2025. The objective is to increase luminosity by a factor of 10 beyond the LHC’s design value.

Luminosity is an important indicator of the performance of an accelerator: it is proportional to the number of collisions that occur in a given amount of time. The higher the luminosity, the more data the experiments can gather to allow them to observe rare processes.

The High-Luminosity LHC, which should be operational as from 2026, will allow physicists to study known mechanisms such as the Higgs boson in greater detail, and observe rare new phenomena that might reveal themselves. For example, the High-Luminosity LHC will produce at least 15 million Higgs bosons per year, compared to around three million from the LHC in 2017.

The High-Luminosity LHC project was announced as the top priority of the European Strategy for Particle Physics in 2013. Its development depends on several technological innovations: 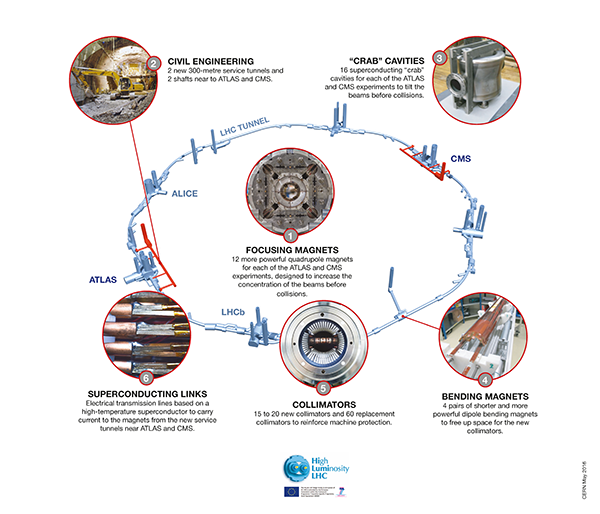 The first phase of the project began in 2011 and was partly financed by the European Commission’s seventh framework programme (FP7). This first phase brought together many laboratories from CERN’s Member States as well as from Russia, Japan and the United States. The design study came to a close in October 2015 with the publication of a technical design report, marking the start of the construction phase for the project at CERN and in industry.

In order to install the new equipment and move certain components around, new underground structures and surface buildings are required. The civil-engineering work started in April 2018 and installation of the first components (the 11 Tesla bending magnets and their collimators, the beam instrumentation, some other collimators and the shielding) will begin during the second Long Shutdown of the LHC, in 2019 and 2020. Most of the equipment and the major experiment upgrades will be installed during Long Shutdown 3, between 2024 and 2026.

The project is led by CERN with the support of an international collaboration of 29 institutions in 13 countries, including the United States, Japan and Canada. The materials budget for the accelerator is set at 950 million Swiss francs between 2015 and 2026, assuming a constant CERN budget.