The ISOL-SRS project is a major component of a wider European initiative that will exploit the upgraded radioactive ion beam accelerator HIE-ISOLDE at CERN and, although still currently under discussion, the heavy ion storage ring CRYRING at GSI/FAIR. The UK collaboration is leading the development and construction of advanced, innovative detector systems for experiments at these facilities that will deliver a vast range of isotopes at energies ideal for studies of nuclear phenomena. It will provide unrivalled opportunities for measuring key reactions and properties of nuclei relevant for nuclear astrophysical processes, and measuring single-particle, collective, and ground-state properties of the nucleus essential to the understanding of the interactions between nucleons in exotic nuclei, at both the precision and intensity frontiers. The main goal of the project is to build a spectrometer system employing high granularity silicon detectors for the measurement of charged-particle reaction products.

The ISOL Solenoidal Spectrometer (ISS) comprises a hexagonal tube of position sensitive silicon sensors placed along the axis of a 4T superconducting solenoid magnet. It is being constructed by a collaboration between the University of Liverpool, STFC Daresbury Laboratory, the University of Manchester, Leuven University (Belgium) and Argonne National Laboratory (USA). In this spectrometer a thin plastic foil containing deuterium nuclei will be placed near the centre of the magnet and bombarded by beams of accelerated radioactive nuclei provided by HIE-ISOLDE. The ions emitted in these nuclear reactions will be bent by the magnetic field so they follow spiral paths until they reach the silicon detectors, which will measure their energies and position along the beam axis. This will enable the energy levels of the exotic nucleus of interest to be measured with very high accuracy.

The University of Liverpool and Daresbury Laboratory are responsible for the construction of the array of silicon detectors and its read-out system. The Si array will use double-sided silicon detectors to give 1 mm position resolution in the axial direction (see the figure below) and 2 mm in the transverse direction. This allows the extrapolation of the particle trajectory to the beam axis itself.

The solenoid magnet of ISS is an OR66 ex-MRI magnet that was previously used for medical imaging research at the University of Queensland's Centre for Advanced Imaging in Brisbane, Australia. Its purchase was jointly funded by the STFC and the University of Liverpool and it was transported to CERN in early 2016. The picture of the magnet below shows the magnet being positioned inside the ISOLDE Hall in March 2017. 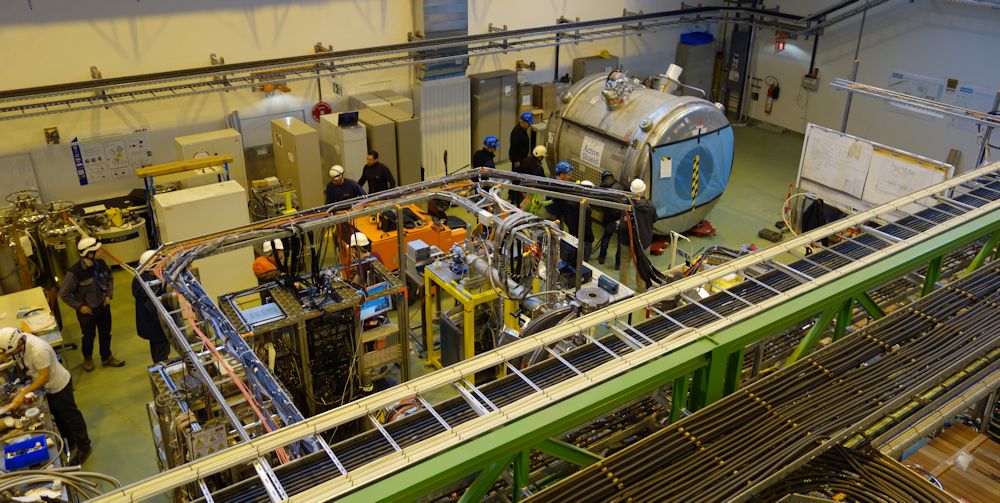