What is the reason for the concern?

There have been recent reports of a severe and frequently fatal pancytopenia syndrome in cats. Affected cats often show signs of haemorrhage or petechiae, likely as a result of profound thrombocytopenia. The cause remains unknown but food poisoning is one possibility and some foods have been recalled. However, no causative link between pancytopenia and the recalled cat food has been established. The sector’s response to this distressing disease is being led by the RVC. There remain unanswered questions about how widespread this syndrome is and whether it is increasing.

What data have we used?

SAVSNET collects data from a sentinel network of UK veterinary practices that voluntarily contribute real time consultation data, and from a network of diagnostic veterinary laboratories. These data include almost 10million health narratives written at the time of consultation by the attending veterinary surgeon or nurse. Here we have used simple text mining to identify those consultations where vets or nurse have used a range of words associated with this syndrome (pancytopenia, neutropenia, haemorrhage, penia and petechiae).

The first figure for cats highlights a short period where pancytopenia (and penia) were mentioned much more in the clinical narratives of cats. When some of these were read, they largely involved discussing owner concern, rather than indicating a likely disease (data not presented). Such use of these words fits well with the concern seen during early outbreaks and recent publicity about this syndrome; we found a similar pattern early in a babesia outbreak in dogs in Essex; lots of talk about worry, rather than confirmed disease. 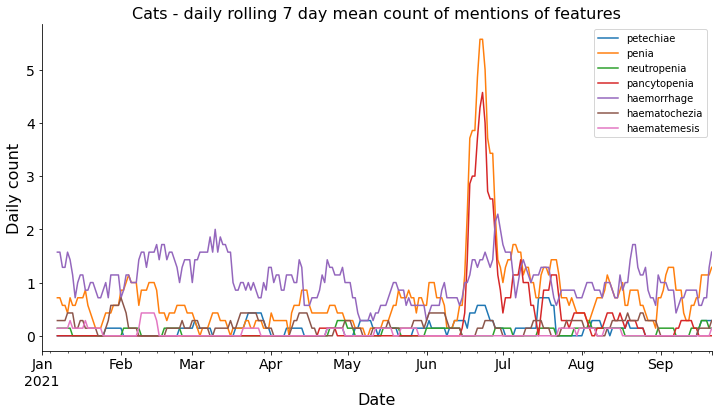 The signal for these two seems now to have returned to a relatively normal level and there is no evidence for a continued upward trend, at least over this time-period. There seemed to be no appreciable change in the use of other marker words associated with reported clinical signs (haemorrhage, haemaochezia, heamatemesis and petechiae).

The second graph (below) shows the same data for dogs, and highlights the specificity of the signal to cats.

Together these observations suggest that this syndrome remains rare, and at a national level, is not increasing and may have returned to more normal levels. However, these data cannot rule out more localized changes that are lost in the overall data or sporadic cases which may be lost in the background levels of disease.

The text mining approaches used here give rapid insight at a population level about use of words. At this stage we have not looked to formerly quantify the context in which these words are used (eg disease present, disease negated, discussion of concern). Equally, the word searches were relatively simple, if other words or spelling variations were being used, they would have been missed by our analyses.

This Rapid Disease Investigations (RDIs') was achievable only because of the data kindly provided by practitioners; SAVSNET cannot produce RDIs for every possible scenario, and the absence of an RDI should not be used to imply there is no issue. These data should not be used as proof as to the presence or absence of events. However, they can be used to inform discussions about possible changes of disease seen in practice. If you are an owner concerned about the health of your pet, then please contact your own veterinary surgeon who is best placed to offer advice.

This RDI was originally published on 6th August 2021 and was updated on 24th September 2021.