Professor Alan Radford was recently awarded the British Hispanic Chair at the Complutense University of Madrid (UCM), Spain, in recognition of the work of the SAVSNET team.

Alan has visited the Complutense three times during this academic year giving a variety of lectures including courses for postgraduate students on surveillance and feline virology. At the last visit Alan addressed a professional meeting to explore the potential implementation of a system similar to SAVSNET in Spain. Participants included the Official College of Veterinarians of Madrid, the Association of Veterinarians working in Industry, representatives of the National Plan on Resistance to Antibiotics of the Ministry of Health, VISAVET Health Surveillance Centre as well as teaching and research staff of the Faculty of Veterinary Medicine of the UCM.

The "Queen Victoria Eugenia" Chair to which Alan has been appointed was created in the 1993 as a result of an agreement signed between UCM and the British Hispanic Foundation. It allows a University Professor from the United Kingdom to complete three stays at the Complutense University throughout one academic year, where they deliver short teaching courses to students, in addition to offering public lectures.

It is a real honour for Alan and we are grateful for the opportunity to share insight gained from SAVSNET with our new international colleagues in Madrid. 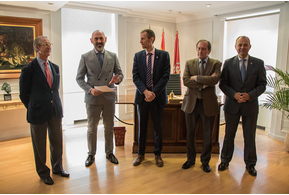 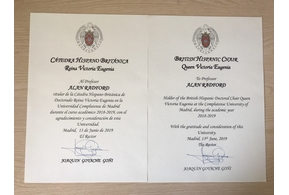 Alan's certificates marking the Chair, both in English and Spanish