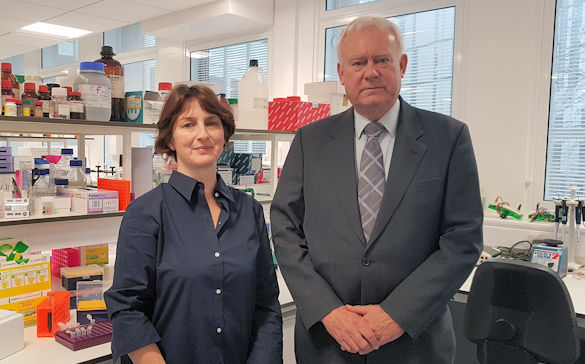 Scientists in Liverpool have been awarded £2.17 million by Cancer Research UK to develop ways to spot pancreatic cancer earlier.

About half of all people with pancreatic cancer develop diabetes before their diagnosis. But researchers don’t have a reliable way to distinguish pancreatic cancer-linked diabetes from normal type-2 diabetes, also known as diabetes mellitus.

This new research at the University of Liverpool, funded by Cancer Research UK, will collect blood samples from people with newly diagnosed diabetes, and look for differences between those who later develop pancreatic cancer, and those who don’t.

The scientists will look for molecules in the samples – called biomarkers – that could form the basis for a way to identify people who could benefit from further cancer tests. Samples from people who take part in the study will be kept in a biobank, to allow for further studies which could help in future research.

“We know about 65% of pancreatic cancer patients have a type of diabetes known as diabetes mellitus, when they receive their cancer diagnosis.

The Cancer Research UK-funded scientists will link in with scientists in Europe and the US who are developing similar patient groups.

This study aims to make it feasible in the future to screen for pancreatic cancer in people with new-onset diabetes.

Peter Breaden, 68, a retired lab manager and grandfather-of-nine from Southport, who was diagnosed with pancreatic cancer in April 2010 and successfully treated on a Cancer Research UK clinical trial, welcomed the funding.

“Sadly pancreatic cancer survival rates remain low and so more research – like the work being announced by Cancer Research UK today in Liverpool – is vital.

“It’s been really exciting to meet the scientists, see their lab and hear about the exciting work they will be doing which I hope will help to make a difference for future patients.”

Thanks to the generosity of its supporters, Cancer Research UK was able to spend over £28 million last year in the North West on some of the UK’s leading scientific and clinical research - helping more men, women and children survive the disease.

Cancer Research UK funds scientists and researchers based at the University of Liverpool. The charity holds various fundraising events through-out the year which are well-supported by people in Merseyside including Race for Life, Pretty Muddy, Shine and Stand Up To Cancer.