Surfatron is a game that simulates the motion of a ball in an undulating track. The goal is to get the ball to gain as much speed as possible in the wave. Your score is the ‘Velocity Gain’ in centimetres per second. 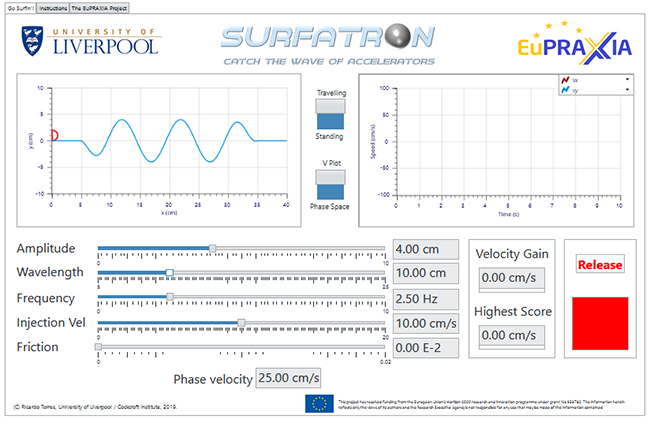 To release the ball, press the red button. Press it again when is green to reset.

The graph on the right shows the horizontal speed of the ball, in red, and the vertical speed, in blue. Use the sliders to adjust the amplitude, wavelength, and frequency of the wave, the initial speed of the ball, and the friction of the track.  Try to find the optimum conditions and then press the release button at the right time to catch the wave!

With the top toggle switch, you can select a travelling wave or a standing wave. Flick the bottom toggle switch to see the trajectory of the ball in phase space (x, vx). You can clear the phase space plot by pressing the ‘Clear’ button.

Click on the tabs to see the instructions and more information about our projects, or email us at project.team@liverpool.ac.uk

Surfatron lets you experience the challenges faced by the scientists working on the field of wakefield accelerators.

Wakefield acceleration is a phenomenon by which charged particles such as electrons can be accelerated to high energies in a very short distance, thus providing a smaller and potentially cheaper alternative con conventional particle accelerators.

Wakefield accelerators use a high power laser or particle beam that is shot into a cavity filled with plasma, creating fluctuations in the plasma density as they travel through it. The plasma waves are then used to accelerate a bunch of electrons, which are injected into the cavity, immediately after the driving beam.

The strong electric fields that arise in the plasma waves allow the electrons to gain very high energies in a very short distance. This process, is similar to that of a surfer catching a wave, and being pushed forward towards the shore.

Just like in the Surfatron, scientists working on wakefield acceleration can control the amplitude, wavelength, and frequency of the waves to maximise the acceleration of the particles. They do so by varying the density of the plasma and the energy of the laser or particle beam that produces the waves.

Thanks to their effort, a new generation of smaller, more powerful particle accelerators, may soon be driving a revolution in science, industry, and healthcare.

For more information, visit www.eupraxia-project.eu or email us at project.team@liverpool.ac.uk