The role of rhetoric in hugely divisive US Election 2020 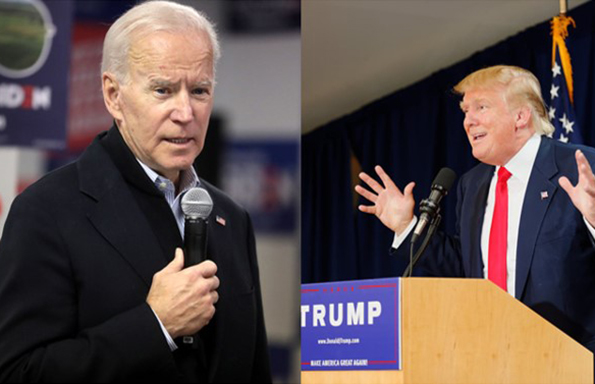 The campaigns to be elected President of the United States are now all but over and election day is upon us. So, it would be useful to look back at how both of the main candidates – Donald Trump and Joe Biden – have sought to rhetorically capture the attention of voters.

A key issue for both candidates, however is that most voters will have already formulated an opinion of both figures in the years running up to the election. Trump has been President since 2016, whilst Biden served as Vice President under Barack Obama. There is little or nothing that can change the minds of large sections of the electorate. Indeed, early voting figures appeared to confirm that returns are far higher in 2020 than had been the case in 2016. This needs placing into context, however given Trump was seen in 2016 as an unwinnable ‘joke’ candidate, thus creating a sense of complacency that Clinton would win. None of that exists in 2020. As such, voters are already coming out to support ‘their man’ (from both sides), leaving little room for the candidates to rhetorically convince voters to shift their support to them.

Consequently, Trump’s rhetorical strategy has been to confirm existing perceptions of his rhetorical character and to try and recapture some of the shock value that he used in 2016. However, the audiences are already familiar with Trump’s style of campaigning given it has been an ongoing feature of his time as President. Indeed, Trump has arguably been in ‘campaign mode’ throughout the previous four year term and so has retained his confrontational rhetorical style. Moreover, Trump has something in 2020 which he didn’t have in 2016 – a governing record. His record is either loved by core supporters, or hated by his opponents. There is very little middle ground, and given voters have already formulated an opinion, Trump’s rhetorical style during the campaign has been to reaffirm his anti-establishment credentials.

In contrast, Biden does have an audience which he needs to appeal towards. Again, core supporters or opponents of Biden are unlikely to have their minds changed by a single debate performance or gaff. However, for Biden his target audience are those Republicans who want to see conventional conservative policies (low tax, low government, and a strong America in the world) which they feel Biden will still deliver. As such, gone are the big left-leaning ideas which we saw being discussed under Bernie Sanders and instead we have a conventional ‘middle of the road’ conservative agenda being articulated from the Democrat candidate.

Biden’s hope is that he will be able to convince enough ‘moderate’ (ie – non-Trump supporting) Republicans to cross the line and back his campaign to remove Trump from office, whilst still benefitting from classic conservative policies. The risk Biden runs, however would be alienating core Democrats who came over to support the party because of Sanders, who may see in Biden the establishment figure that Sanders (and Trump) both oppose.

At the time of writing, there is little purpose attempting to predict the outcome of the election given the result will be known soon enough. However, there is little doubt that one thing both figures can be judged on is their record in the White House. For Biden, this is his record as Vice President. For Trump, it is his governing style which is loved/hated in equal measure by supporters/opponents. Their records have been used by both candidates as a stick during the campaign with which to beat their opponent. The issue is, however which is most memorable. If the commentators are to be believed then we will most likely see a Biden victory. However, how Trump responds to this outcome has been the source of some anxiety amongst his opponents. For example, we have already heard talk of lengthy battles in the Courts and some even fearing he may sabotage attempts at a ‘peaceful handover of power’.

Consequently, we can conclude that regardless of the outcome of the votes this week, it is highly unlikely that we will have heard the last of Donald Trump. Indeed, if his defeat is narrow and Biden makes it to the Presidency, I wouldn’t discard the possibility of a repeat performance from Trump in 2024.

For all the latest insight on the US Election - including a Spotify playlist to see you through the night - visit the University's US Election 2020 hub at www.liverpool.ac.uk/politics/US-election-2020/