In September 2015, I and three friends were lucky enough to win the physics department’s Dragon’s Den competition for our electronics project.  We were given 2/5/6 thousand pounds of funding and the support of a number of academic staff to complete a project that we had started a few months earlier as part of our electronics laboratory module.

The project spanned four weeks in which time we had a whole lab more or less to ourselves with no more restrictions or guidance than the targets we had set ourselves when pitching our idea to the Dragons.

The project’s aims were to construct an interactive table with an LED screen and controls (in this case we decided to go for a retro gaming style joystick and buttons) that could be run solely off a raspberry pi and an Arduino board.  By the end of our initial 6 week labs projects we had managed to create a small but functioning 8x10 array of individually soldered LEDs that could display scrolling text – a long way from an interactive table!

The dragon’s den project was a very different experience.  Due to the generous funding we were able to bypass much of the electronics involved in the product. The main issues then became programming and making the different components communicate properly.  This took us into an area we had never explored in our lab sessions and we were forced to learn on the job. 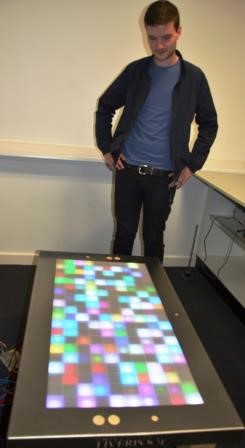 The skills learned during the project have proven extremely useful in a number of ways since the project ended.  Firstly, it has provided me with an awful lot to say on job and placement applications.  I have added skills such as working to deadlines, working to budgets, working independently and without guidance, and a new coding language to my CV.

All four members of the team were offered internship placements the following summer (with FermiLab, LHCb, Canberra and the University of Massachusetts) and all four of us felt that the Dragon’s Den project had given us a big boost in acquiring them.  The extra coding experience also proved useful in our third year Java project.

I have met and developed good relationships with a number of new people in the University, not only in the Physics department, thanks to the help and advice we were given during the project.  The four of us who worked on the project have all been approached (individually and as a group) by people or groups interested in acquiring a table or a similar product for themselves and a number of casual job offers have been made.  On the other hand, we have also been approached by parties with a deeper understanding of computer coding about a collaboration to make an even better product.

On a practical level we have also had numerous opportunities to earn some money and gain some publicity by presenting the table at events separate from the university as well as within it.

The experience has also provided me with much more confidence in my abilities working independently.  We learned quickly in the first week of the project that working individually on a project designed by ourselves threw up many challenges we had never faced in academia. 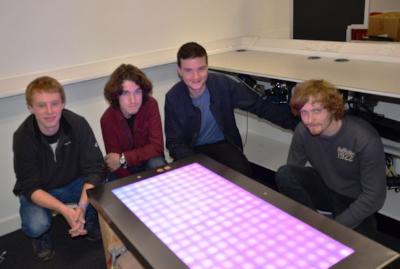 We had to learn how to prioritise tasks, manage a budget, plan our time and teach ourselves the necessary skills.  These things sound trivial but it’s not until you are doing it that you realise how much of a safety net you have grown accustomed to – no lecturer to ask for help, no solutions on the internet and no guidelines.  We also had to work as a team, delegating tasks and trusting each other to accomplish them and to know what was best in our respective areas.  It wasn’t until the final pieces came together that any of us really knew that everything had been done properly but throughout the project we trusted each other and worked efficiently together.