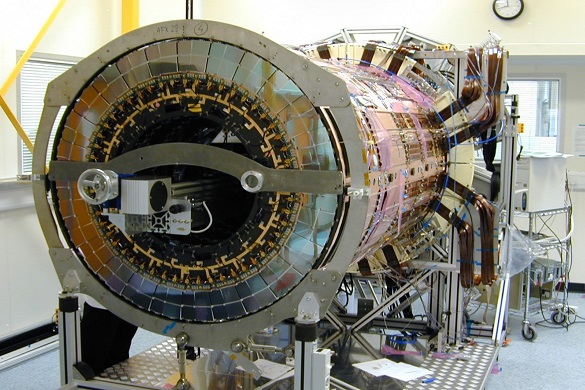 Today the worldwide particle physics community celebrates the 10 year anniversary of the discovery of the Higgs boson.

Members of the Liverpool ATLAS group join celebrations at CERN, Westminster and in Edinburgh, the home University of Peter Higgs, who gave his name to this long-searched-for particle, he and others had predicted 50 years earlier.

The University of Liverpool has played a major role in ATLAS from its early conception and construction to  the ongoing operation of the experiment and analysis of its data.

One of the forward silicon trackers at the heart of ATLAS, which has been critical to many Higgs studies and other ATLAS physics results, was constructed in Liverpool.

Professors Andrew Mehta and Joost Vossebeld led Liverpool’s contributions to the ATLAS Higgs programme in the early days of the LHC, looking for evidence of multiple possible Higgs production and decay channels.

Professor Joost Vossebeld said: “Working on the construction of ATLAS and on the search for the Higgs boson in the early days of the LHC was an extremely exciting period.

"From early 2012, combining the results from analyses done by over 300 people worldwide, and after some earlier false-alarms, it started to become clear that now the evidence was finally stacking up to the degree that justified announcing the discovery.”

Professor Mehta continues to lead the Liverpool programme to study the Higgs boson.

He said: “The first years after the discovery allowed us to confirm the discovered particle does indeed give mass to the other known particles. Since then we are studying the Higgs boson with ever increasing precision, as further undiscovered particles could change its behaviour. To get the most out of the LHC we are now building improved tracking detectors to prepare the experiment for more intense rates of collisions at the LHC after 2028.”

Professor Themis Bowcock, who was Head of Particle Physics at the time, said: "The Higgs discovery was a milestone moment for science and, dare I say it, for humanity.  It shows what we can achieve with planning, working together and peacefully towards a common cause. A huge step forwards without disruption, conflict or strife; a project 40-50 years in the making. This should give us hope that other urgent challenges both scientific and social can be tackles successfully. In short, 10 year on, I see the Higgs work at CERN as providing a beacon of optimism."

Further information on the University of Liverpool's Particle Physics group can be found at this webpage.