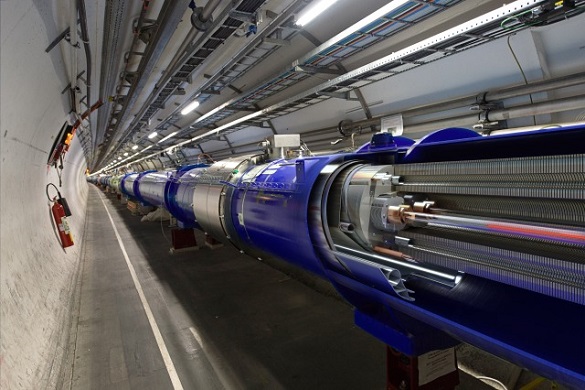 CERN has announced the world’s most powerful particle accelerator is ready to start delivering proton collisions to experiments at a record-breaking energy level.

The Large Hadron Collider is preparing to deliver data at the unprecedented energy of 13.6 TeV. University of Liverpool scientists are part of the international collaborations that will collect and analyse the data.

This marks the start of the accelerator's third run of data-taking for physics at CERN, on the French-Swiss border near Geneva.

The beam began circulating in April, after more than three years of upgrades and maintenance work to make it even more powerful.

The LHC machine and its injectors had previously been recommissioned to operate with new higher-intensity beams and increased energy.

Beam operators have now announced the beam is stable and ready to start taking data to be used for science.

The LHC will now run around the clock for close to 4 years at the record energy of 13.6 trillion electronvolts (TeV).

Scientists at the University of Liverpool were part of the international effort to improve the performance of three of the LHC’s four main experiments – LHCb, ATLAS, and ALICE -in order to increase data samples and generate higher collision energy.

Professor Monica D’Onofrio is team leader for the ATLAS and FASER experiment groups at the University of Liverpool.

She said: “This is a very exciting moment for all of us: after years of work spent to upgrade the ATLAS detector system with new components, improved data readout and improved online selection, we are ready to collect significantly larger data samples, of higher quality than previous runs.

“We will be able to probe the nature of the Higgs boson with unprecedented precision, test whether it decays to new particles, for example those that could make up dark matter, and search for new physics at the highest energy ever reached by an accelerator.

“Our group at Liverpool has been at the forefront of many of these searches and precision measurements since the beginning of the LHC operations, and we are looking forward to starting this new phase of the ATLAS experiment.

“It is also fantastic that, in addition to the four large LHC experiments, several brand-new smaller experiments, built and installed during the long shut down, will see their very first data as Run 3 starts. Liverpool is part of FASER, built to search for the decays of hypothesised new particles with a long lifetime produced in LHC collisions that are candidates for dark matter. It will nicely complement the ATLAS physics programme exploring previously uncovered regions. The next years will be undoubtedly compelling, and we are all engaged to make the most out of these fantastic detectors and accelerator.”

Professor Marielle Chartier, team leader for the University of Liverpool ALICE experiment said:  After nearly ten years of research and development the ALICE experiment has completed major upgrades of its detectors, electronics, triggering and computing systems during the LHC second long shutdown, ready for today’s start of its third run of operation. Over the next decade, ALICE will be able to collect much more data from the LHC proton-proton, proton-ion and heavy-ion collisions, much more quickly than before.

“I am personally very excited to see how well the new Silicon Inner Tracking System will perform to achieve high-precision measurements of short-distance dynamics in quantum chromodynamics at high temperature and gain a deeper understanding of the quark-gluon plasma.

"This new detector is the largest silicon pixel tracker ever built and the first that is made entirely of CMOS sensors, making it the most pixelated, as well as thinnest, silicon particle tracker at the LHC.

“The University of Liverpool, in partnership with STFC Daresbury Laboratory, made leading contributions in the construction, assembly and commissioning phases of this giant (approximately 10 m2) digital camera of nearly 13 billion pixels, capable of taking 50,000 pictures per second!”

Liverpool Professor of Particle Physics, Tara Shears, who works on the LHCb experiment, said: “There's so much about the universe that we need to understand: why matter and antimatter are different; what dark matter is made of; whether the new physics we think and hope is out there, somewhere, reveals itself. This is why Run 3 is so important to us. It will give us so much data that we can make a really forensic investigation into all these questions.

“My experiment, LHCb, has been extensively overhauled and upgraded ready for the start of data taking, and at Liverpool we've constructed one of the main particle detectors for it. No-one was expecting a pandemic to hit when we planned this! It's a tribute to the commitment and skill of our fantastic staff at Liverpool that despite all the challenges this intricate detector has been successfully assembled, delivered and installed ready for Run 3. Data from this new detector will make the whole LHCb physics programme possible.”

The four big LHC experiments have performed major upgrades to their data readout and selection systems, with new detector systems and computing infrastructure.

The changes will allow them to collect significantly larger data samples, with data of higher quality than in previous runs. The ATLAS and CMS detectors expect to record more collisions during Run 3 than in the two previous physics runs combined. The LHCb experiment underwent a complete revamp and looks to increase its data-taking rate by a factor of 10, while ALICE is aiming at a staggering fifty-time increase in the number of recorded collisions.