This August, the 2021 edition of the Particle Physics School ran by University Liverpool students on their Long Term Attachment (LTA) at CERN took place in an online format. Unfortunately, the 2020 edition had to be cancelled, which led to the decision of organizing an online version of the event this year, ensuring that travel restrictions would not challenge this event.

LIV.DAT student Ricardo Gonzalez led the organization of the school, together with LHCb PhD student Abbie Chadwick. Ricardo’s research is connected to the ATLAS collaboration where his project focusses on new heavy gauge bosons searches which are candidates to expand the Standard Model of Particle Physics. ATLAS is one of two general-purpose detectors at the Large Hadron Collider (LHC). It investigates a wide range of physics, from the search for the Higgs boson to extra dimensions and particles that could make up dark matter.

The school was designed and setup for high school students, hosting students from Sevenoaks, Birmingham and Liverpool in a week where they were presented the foundations of modern particle physics, as well as an overview of the main areas of interest in the field. 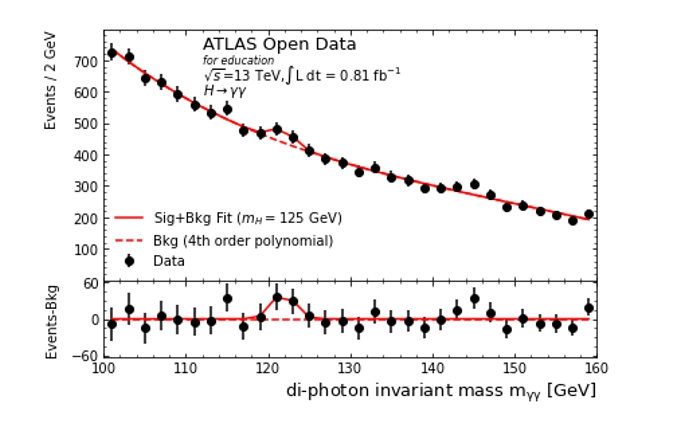 During the week, students could replicate the diphoton search that led to the discovery of the Higgs boson and the Nobel Prize in Physics in 2013.

The programme made up for the lack of in-person activities including hands-on sessions, where the students could make use of the ATLAS Open Data to replicate real analysis carried out in the experiment. The school also included a virtual tour to the ATLAS cavern, where an official guide of the experiment showed the detector on a live videoconference with the students while answering the audience’s questions.

Students attending had the chance to participate in a research project of their own, where they chose a new physics phenomenon they were interested in and proposed an experiment to detect it. This gave them the opportunity to expand on the ideas presented in the lectures, as well as an opportunity to research a topic on their own and present their findings to the audience. The students showed a great level of understanding of what had been taught during the week, as well as an amazing imagination for conceptual future experiments.

The week closed with a session featuring different University of Liverpool PhD students, offering an overview of many different experiments University is involved in via LIV.DAT, giving the audience a glimpse of the many interesting open question being searched for in Physics. Special thanks to LIV.DAT students Jaiden Parlone, Phillip Marshall, Antony Hibbert, Sean Hughes and Aravinda Perera for their help.