Adam Lowe, originally from Oxford, moved to Liverpool in 2015 to complete a foundation year in physics at Carmel College, St.Helens, before starting a Bachelor’s degree at the University of Liverpool the following year. Within his first year he changed to the integrated physics masters and graduated in the summer of 2020.

It was his work with detector hardware and passion for particle physics that led to him choosing a masters project in neutrino detector calibration and his interests with regards to PhD projects.

Adam joined LIV.DAT in 2020 as a PhD student working on hardware at the Liverpool physics department within the ARIADNE project. His research is focused on scaling up this novel neutrino detection technology for future large scale experiments such as DUNE. 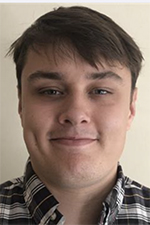