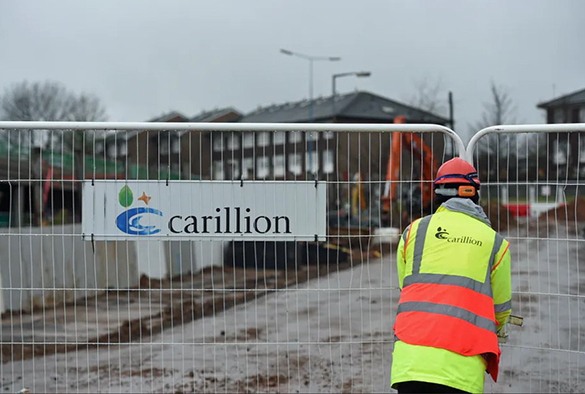 It was a dramatic end for government super-contractor Carillion when it crashed into insolvent liquidation in January 2018. Part-completed road projects, unfinished hospital buildings and disruption to hospital cleaning and catering heralded the end of this self-styled “integrated support services business”.

Carillion owed its creditors over £1.5 billion, and when matters came to a head on the back of asset write-downs and a plummeting share price, the government refused to mount a rescue. In the end over 3,000 employees lost their jobs and many supplier firms lost contracts, with domino insolvencies spreading from the rotten core of Carillion.

Now comes the possibility of a regulatory reckoning, at least for eight directors of the public limited company. The government’s Insolvency Service has announced that it is bringing directors’ disqualification proceedings against these former directors for their alleged role in running the construction and infrastructure contractor into the ground. They include former chairman Philip Green and former chief executives Richard Howson and Keith Cochrane.

The case will be heard in the coming months. If the court holds them unfit to run a company, they will be banned from holding directorships for up to 15 years.

The move is the second high-profile disqualification action by the Insolvency Service in a short period, coming hot on the heels of its case against the directors of collapsed charity Kids Company, which is still with the high court.

It also comes at a time when the Financial Reporting Council has increased fines for accountants who have been involved in auditing troubled companies, which could include Carillion. So should we read the new case as a sign that the UK authorities are getting tough on corporate wrongdoers more generally?

It is certainly relatively unusual to see directors of a public limited company – as opposed to small private companies – being pursued by the Insolvency Service for disqualification. This may be in part because plc directors tend to use professional advisers on whose advice they rely. This has in the past been treated by the courts as a reason for exonerating those in charge, and indeed the Carillion directors may seek to point to that delegation of responsibility as part of their defence. Whether or not that is a credible response will come out in the wash.

This tougher stance from the UK authorities follows similar patterns across the globe. For example, Australian company law authorities have taken an increasingly pro-active approach to dealing with director behaviour, including imposing greater personal liability on directors.

But at the same time, the Carillion collapse resonated with the public in a way that bears few comparisons. Perhaps this was because it left at least two unfinished hospitals in Liverpool and Birmingham, or because so much of the company’s work came from the UK government and therefore taxpayer’s money.

Equally, the government awarded Carillion over £2 billion in contracts in the year before the collapse despite three warnings to shareholders that profits would be below expectations. The directors were paid very generously, signed off on handsome shareholder dividends and despite this, left a pension deficit of nearly £600 million. And the taxpayer had to pick up an additional bill of £150 million to cover redundancy payments and the fees of the lawyers and accountants who helped deal with the collapse. Perhaps all this added up to a sense that this was an exceptional case.

Another possible explanation is that the Insolvency Service tends to prioritise high-profile failures. The watchdog has limited resources, and pursuing newsworthy cases can send out a deterrent message both to directors and the wider public. Besides Kids Company, previous high-profile cases that it has pursued include Christmas hamper savings club Farepak and the “Phoenix Four” former directors of MG Rover.

Disqualification is not necessarily the only threat to the eight Carillion directors. The Insolvency Service may also push for a compensation order, a relatively new option that was introduced in 2015 and first used in 2019, against the directors of wine broker Noble Vintners. Such a move could see the directors forced to pay compensation to the creditors directly from their own pockets.

This latest set of directors’ disqualification proceedings marks a ramping up by UK regulators in their efforts to hold directors accountable for their management failures. This signals that higher standards are now expected from those who use companies to do business in the UK. It will be interesting to see if this makes any difference in the coming years.