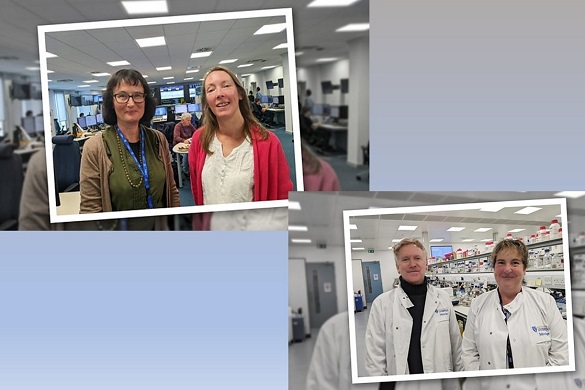 The Language Exchange pairs a poet with a scientist to see what happens when their worlds come together. After spending time with the scientist to learn about their research and the language they use, the poet pens a brand new poem inspired by their discussions which they then read out to the scientist.

The first episode of the new series features Liverpool physicist Professor Tara Shears and the award-winning poet Fiona Sampson who met at the Large Hadron Collider (LHC) at CERN.

Tara gave Fiona a tour of the LHCb experiment, or the LHC beauty experiment, which is exploring the differences between matter and antimatter in particles containing b (beauty) quarks.

They discuss what antimatter is and where it has gone alongside exploring some of the words and language used by physicists, including their inspiration and meanings, for example why is the beauty quark called the beauty quark?

In response to hearing Fiona’s poem, Tara said: “That in essence really captures the fleeting nature of everything we are looking at in our experiment and yet also the deeper significance of it. It really touched me. It really made sense to me.”

You can listen to the episode here: BBC Radio 4 - The Language Exchange, Fiona Sampson and Tara Shears

Liverpool-born poet Paul Farley spent a day in the lab with Professor Anne McArdle from the University’s Institute of Life Course and Medical Sciences learning about the MicroAge project which is using space to understand what happens to human muscles as we age.

During the episode Paul finds out what the team are hoping to achieve from the project, the challenge of language barriers within the research team of physiologists, biochemists and engineers and the excitement of seeing their experiment “blast off” into space.

Paul also talks with Professor Malcolm Jackson, Director of the MicroAge project, about the use of language and the importance of communicating science to a wider audience.

Professor McArdle said: “The poem Paul has written in response to his visit to the MicroAge lab blew me away. It made me very emotional, which I really wasn’t expecting. I have never heard our science portrayed in such a way.”

The MicroAge project is delivered by the University of Liverpool, the UK Space Agency and Kayser Space Ltd.