Name a Seat Stories: The personal stories behind the plaques, part three

The Name a Seat campaign was launched to celebrate the introduction of the new Yoko Ono Lennon Centre on campus.

Many of our supporters have shared the stories behind their gift – what inspired them to name a seat, and who they have dedicated their seat to. This is the third instalment of stories, here is the first and second instalment.

“The project to build this concert hall has been the focus of my work at the University. It is unique opportunity for the institution but especially the Department of Music, which I have been very proud to lead. It’s not often that an academic gets the chance to do something like this and of course I will expect to have great affection for the Tung Auditorium. My dedication is for my family in recognition of their love and support. They have had more input into the development of this hall than they will ever know!”  - Professor Catherine Tackley (Professor of Music; Head of the Department of Music at the University of Liverpool)

“As only the fifth Liverpool-born musician in America’s Rock & Roll Hall of Fame (inducted in 2010 with The Hollies), Terry Sylvester played a key role in the explosion of Liverpool’s music scene at The Cavern in the 1960s and beyond through his membership in local bands The Escorts and The Swinging Blue Jeans before going onto to achieve global fame with The Hollies.

Naming a seat in the new music auditorium in the city of his birth seemed a natural thing to do, especially with his granddaughter now studying Politics at the University of Liverpool.

“I loved my three years in Liverpool. The city, the university, the friendships, the inspiration.” - Miss Eleanor Relf (BA Hons English & Communication Studies, 2001)

“The University has been very patient with me. Due to an uneventful career circumstance, I was lost for a while. I have made it, and I want to give back. Thank you.”- Dr Bee Hwa Low (DBA Business Administration, 2019)

“May the Tung Auditorium bring as much pleasure to music lovers over the years as music has brought to our family. Best wishes to all concerned. Family Marsden” - Keith Marsden (BSc Bachelor of Science, 1965) 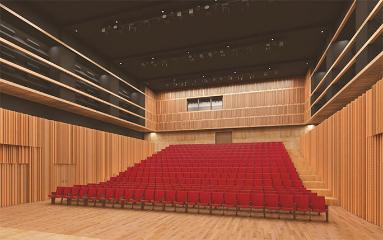 The Tung Auditorium will be located at heart of the Yoko Ono Lennon Centre  We are inviting you to play a leading role in this project by naming a seat.