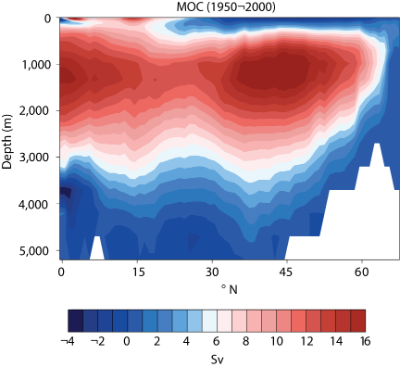 Figure 1. A combined model-data estimate of the ocean overturning in the North Atlantic. Warm fluid moves northward over the upper 1 km and returns southward at depth. The rate of this overturning reaches 16 million cubic metres per second or 16 Sv. Further details in Lozier et al. (2010).

The oceans advect heat over the globe, which reduces the pole-equator temperature contrast. In the North Atlantic, the ocean heat redistribution is mainly achieved by an overturning circulation, involving warm water near the surface move northward and cold water at depth return southward.

There is concern that this ocean overturning might alter with climate change, particularly given melting of sea ice in the Arctic and predictions of high-latitude warming. To address this concern, a joint UK and USA programme, RAPID WATCH, is measuring the overturning at 26.5N. The results have turned out to be surprising, there are larger variations in the overturning on timescales of a few weeks. Making any reliable inference about a climate drift requires a record of several decades.

Example of Work at Liverpool 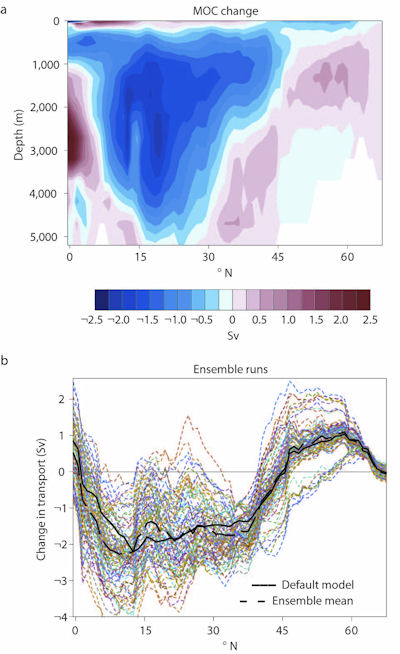 Also at the Natural Environment Research Council (NERC) National Oceanography Centre (NOC) in Liverpool, we are studying how the overturnings measured at different latitudes in the North Atlantic are related to each other (Hughes et al., 2011). By collaborating with several laboratories in Canada and in the USA, as well as with NOC Southampton, we are analysing ocean seafloor pressure measurements which are indicative of the overturning in the North Atlantic (Elipot et al., 2011) 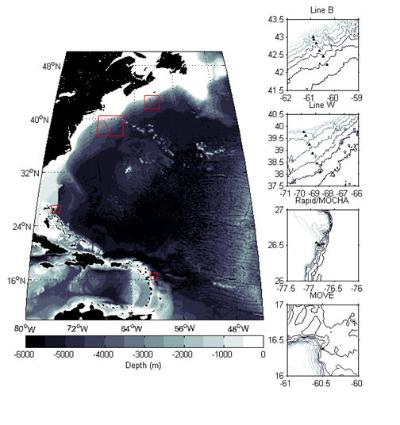 Figure 3. Western North Atlantic bathymetry and  locations of western boundary arrays used to derive western  boundary overturning transports. On the left panel, the arrays  are drawn as red lines and the red longitude-latitude boxes delineates the close-ups on the right; from north to south, these are RAPID-WAVE line B, Woods Hole line W, RAPID-MOC/MOCHA western boundary array, and MOVE array. 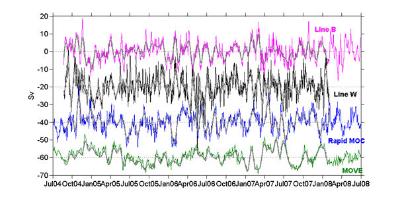 Presentations in the Marine Sciences Symposium 2008
'Climate change: the science and the impacts - a Liverpool perspective' by Chris Hughes (POL) on Ocean conveyer belt: is it changing or not? 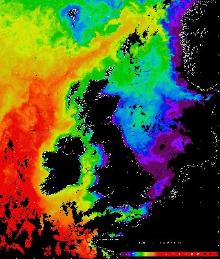 A remotely sensed sea surface temperature picture (red is warm, purple is cool) in 22 February 2006. Warm water is seen advected northwards off the coast of the UK and Ireland. This advection of heat is part of the ocean overturning.