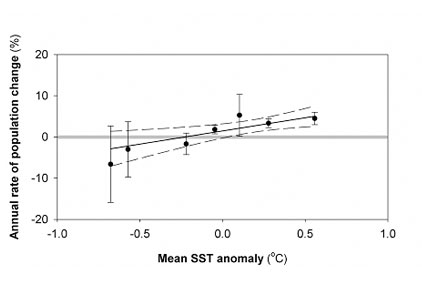 Seabirds are top predators in marine ecosystems. They are also charismatic and highly visible animals, popular with professional and amateur ornithologists. This is in part because their life cycle constrains them to spend part of their time on land, incubating their eggs and rearing their chicks. However it is this visibility on land that makes seabirds extremely useful indicators of status and change in marine systems. Put simply, changes in conditions at sea are often reflected as changes in behaviour or breeding success of seabirds on land.

For this reason,  seabirds have been proposed as indicators of the status of populations of their prey stocks, usually small pelagic fish or crustaceans1. More recently, seabirds have been used as indicators of climate-driven changes in marine systems. Indeed the Adélie penguin (Pygoscelis adeliae) has been called the ‘Bellwether of climate change’2.

Current research efforts around the world are focussing on how climate change will impact seabirds at the individual and population level, not only for the sake of these species themselves, but as indicators of changes in other parts of foodwebs. Climate change impacts on seabirds may be direct or indirect. Direct effects are those where changed climate and weather patterns impact on adult survival or breeding success. Examples include storms leading to winter ‘seabird wrecks’ where hundreds of birds die3, overheating on land in burrows or open nests 4, or changes in sea-ice leading to loss of habitat for breeding5. Indirect effects are those where changed oceanic temperatures or currents lead to changes in the availability, location or abundance of prey species. As a result, particularly during the breeding season, seabirds may have to spend more time foraging and/or provide less food to their chicks. This in turn can mean lower breeding success and lower recruitment into breeding populations6,7.

At Liverpool, we are looking at climate change impacts on seabirds at multiple scales. Recent work has shown that not all populations will be ‘losers’ under future scenarios of change. The great cormorant (Phalacrocorax carbo) population in Greenland, in the Arctic, is thought to be limited only the availability of suitable breeding and foraging habitat. Recent decreases in summer sea-ice extent around Greenland mean that more areas are available for colonisation and as a result, the population is increasing (Figure 1)8. Other studies are looking at how Australasian gannets (Morus serrator) and little penguins (Eudyptula minor) will cope with longer, hotter Australian summers. 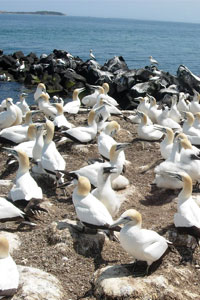