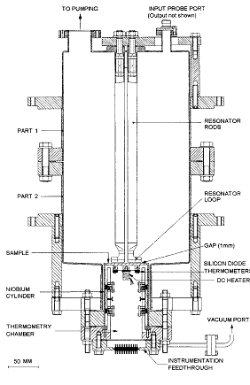 A more convenient way to investigate the surface resistance of superconducting materials is the examination of small samples. Small samples can be cheaply manufactured and easily multiplicated.
Therefore a device enabling to investigate superconducting samples at 400 MHz has been developed at CERN. Recent studies showed that the device can also be used at other resonant frequencies. Due to the field distribution inside the device it has been named Quadrupole Resonator. It can be used to study the surface resistance, critical magnetic field, and other important material properties. Surface resistance of a bulk niobium sample as a function of applied field at 400 MHz for five different temperatures measured with the Quadrupole Resonator.