Antiprotons have been considered for cancer therapy first in the 1980's. This is based on the fact that antiprotons will penetrate a target similar to protons, but will at the end of their range annihilate. In this annihilation process twice the mass energy of a proton will be released. Much of this energy will leave the target in the form of minimum ionizing particles (ions and high energy photons) but a small, but clinically significant, portion of the energy will be deposited locally through short range secondaries and recoil ions.
First measurements of the energy deposition of antiprotons in water were performed at CERN and showed that for an identical energy deposition at the skin level the energy deposited in the Bragg peak of antiprotons is twice the value obtained for protons. But in addition to this doubling effect it is expected that the additional energy deposited locally by the annihilation event will exhibit a higher biological efficiency – essentially it is as if there is a microscopic heavy ion accelerator being implanted in the tumour cell. An experiment at the Antiproton Decelerator (AD) at CERN has been initiated in 2003 to study the biological effects of antiprotons on living cells. Dr. Michael H. Holzscheiter, spokesperson of the experiment, joined the QUASAR Group between 2009-2011 within the EU-funded APCT project -  coordinated by Prof. Welsch. Several Diploma and PhD theses were realized within this framework. 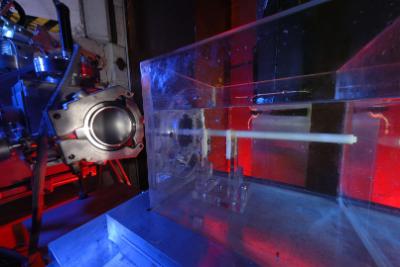 We conducted a concerted research effort to establish a base data set for potential future use of antiprotons in cancer therapy of specific and hard to treat cancer cases. To have clinical relevance a new extraction scheme to extract 126 MeV antiprotons from the Antiproton Decelerator (AD) at CERN has been developed in close collaboration with the accelerator operations team at CERN. This beam has a penetration depth of about 11 cm in human tissue-like targets. Using an automatic degrader wheel the beam was used to provide a spread-out Bragg peak (SOBP) of approximately 15 mm depth, suitable to potentially treat small tumors. During our work 3 beam times were provided by the AD, each of approximately 1 week duration, in which irradiation experiments on V-79 Chinese Hamster cells embedded in a gelatin matrix were conducted. In addition, developmental work on dosimetry of high Linear Energy Transfer (LET) particles was carried out.

In parallel, a number of experiments were conducted at the University of Aarhus, the DKFZ, GSI and the HIT facility. Compared to proton beams antiprotons exhibit a two times higher Bragg peak due to the annihilation energy deposited locally. In addition, antiprotons exhibit a photon-like RBE at the entrance to the target, which then sharply increases at the beginning of the SOBP to about 1.7 - 2.0. This sharply contrasts the slow increase of RBE along the beam path of Carbon ions, and complements the increase of physical dose in the Bragg peak of antiprotons.

Virtual planning studies that were carried out in the frame of this project on a 4x4x4 cm size target visualized this advantage. Comparing protons, antiprotons, and carbon ions, it is now obvious that antiprotons have the lowest dose in the entrance channel and that they show a spherical dose halo surrounding the Bragg peak region. These preliminary data will have to be corrected for the RBE data obtained in the project and can then be applied to virtual planning studies on actual patient data. Promising candidates are small sizes tumors (< 10 cm3) attached to critical structures such as for example the brain stem or spinal cord, and tumors that can only be treated using primary beam paths through regions of sensitive tissue or which have been irradiated in prior treatments.

The work of the QUASAR Group in this research area was supported by the EU under Grant Agreement 234814 and DFG under contract WE3565/5.