The Cockcroft Institute  held its 2nd particle accelerator school at the start of November. The school was attended by 23 students from 5 different Universities and ASTeC. The two week school was split into two parts with the mornings dedicated to lectures, including a talk on the new proton therapy centres from Ranald MacKay from Christie Hospital, and the afternoons dedicated to a design exercise.

Prof. Carsten P. Welsch, head of the QUASAR Group, contributed 2 hours of lectures on beam diagnostics. In his course, he gave an introduction to the measurement of beam position, profile, intensity, energy and emittance. He highlighted the numerous specific challenges that arise in so-called ‘novel’ accelerators where high gradients in a plasma are used to accelerate beams of charged particles. His lectures were complemented by an hour-long tutorial where the students were asked to design the diagnostics system for a 3rd generation light source.

The school was closed with a talk from Ian Martin from Diamond Light Source on the facility commissioning. The school also had a social programme including meal, a team building exercise at an indoor climbing centre and a trip to ClueHQ where each of the four groups had to escape from a room by solving puzzles. Unfortunately none of the students were able to escape and had to be let out. 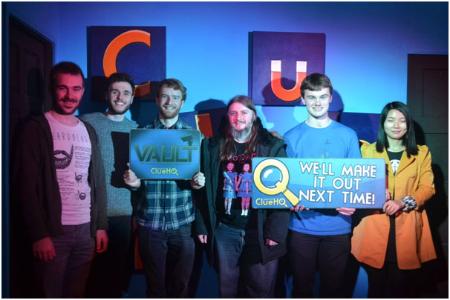 The students and lecturers all found the school very educating. Dr Graeme Burt, head of education and training at the Cockcroft institute remarked “I was amazed by how well the students did in the design exercise. They all seemed to learn a lot and I was very impressed by the well-informed questions they asked at the end of Ian Martins talk.”