Particle accelerators are essential tools for many disciplines in science, namely: high energy physics, medical imaging, cancer treatment, material science, etc. In all cases the accelerator must deliver the critical particle beams with ideally 100% up-time. Commissioning and operating accelerators is a discipline in its own right and can be thought of as an enabling new science, such as the discovery of the Higgs boson. Beam instrumentation in particular can be seen as the eyes of the accelerator and provides the only way to characterize beam properties and quality, thereby allowing the beam to be tuned for the needs of the users. 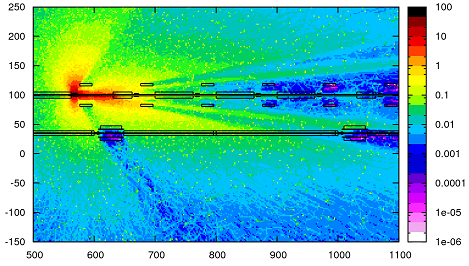 Absorbed prompt dose due to destructive loss at a CLIC drive beam at a beam energy of 2.4 GeV (S Mallows)

Beam losses are particles that deviate from the ideal trajectory of the accelerator and hit the vacuum chamber producing cascades of high energy particles. This ionizing radiation is potentially dangerous for the equipment of the machine and creates unwanted noise in measurements, but can be detected with particle detectors located near the accelerator. A Beam Loss Monitoring (BLM) system is responsible for detecting the location and intensity of beam losses and triggering a protection sequence if the observed radiation levels exceed a predefined threshold. The choice of the particle detectors for a BLM system depends on the amount and type of expected radiation, cost and the ability to test them remotely. The use of optical fibers is an interesting possibility. Charged particles crossing such fiber will produce Cherenkov radiation which will partially propagate to the end of the fiber. The light pulse generated by beam losses is transformed into an electrical signal via photo-detection and an amplification chain. The photo-detector choice needs to be based on time response, sensitivity, spatial and time resolution and dynamic range.

The Royal Society has just announced that it will support QUASAR research into novel optical fiber-based loss monitors over the next two years, in particular measurements that shall be carried out at the Australian Synchrotron near Melbourne. This will allow studying both, the physical behavior of the beam and the particle shower developments and thus to identify beam loss locations and expected energy deposition in the radiation detectors.